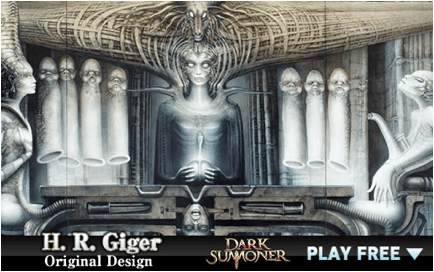 Card battle games. Love them or hate them, there’s one thing we can all agree on: they sure do look pretty. And if you play Dark Summoner, things are about to get a lot prettier. Or at least, pretty weird and scary. That’s because H.R. Giger has created some exclusive creatures to haunt your nightmares (and play sessions).

Giger’s art is legendary, appearing everywhere from album covers to art galleries. His legacy, though, is that of the creature and set designs he contributed to the movie Alien.

Oh – and making a handful of cool illustrations for your Dark Summoner, of course.

The in-game event that will feature these creatures begins on August 17th, and will continue each weekend after that. Giger’s trio of creatures, The Divinities, will appear one at a time during these weekend events. And some lucky players, according to developer ATEAM, will be able to summon and acquire these Giger creations for their very own.

Now if you’ll excuse me, I have a blu-ray of Alien to buy.