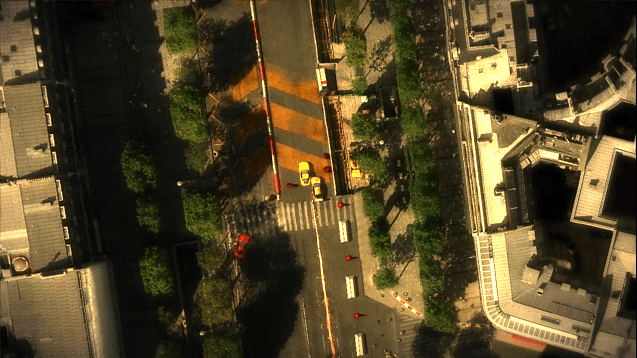 Imagine, if you will, a mash-up of Micro-Machines and Google Maps. Sound like fun? If so, then you should probably take Real World Racing for a spin. The game combines top-down arcade racing with high-quality, fully-licensed aerial images for some simple but fun crash-and-bang street racing action.

Despite the relative simplicity of the gameplay, Real World Racing will have lots of sights to see and plenty of high-speed machines to blast past them in. The final game will feature 80 different vehicles ranging from nimble sports cars to high-end luxury cruisers and massive off-road monsters, and more than 50 tracks set in famous cities from around the world, plus weather effects, unique “car parameters” and realistic physics that makes each machine feel unique.

The game will support single-player action with quick races and a full-on career mode, and also multiplayer races with up to 16 people at once. There’s also a heapin’ helpin’ of unlockables, as you’d expect from an arcade racer, and although “visual tuning” is already part of the game – a fancy way of saying you can change your car’s color – further customization options are also being considered. Similarly, while both licensing and technical issues mean that a track editor isn’t currently part of the plan, some kind of accessible modding options may be added in the future if there’s sufficient demand for it.

A demo of the game available on the Real World Racing website offers aspiring Andrettis access to a half-dozen vehicles and three circuits in Rome, London and Berlin, in single-player “arcade mode” action, and it’s actually pretty good, with animated streets and an appropriately pulsating backbeat. Real World Racing is also up for voting on Steam Greenlight, so if you like what you see: