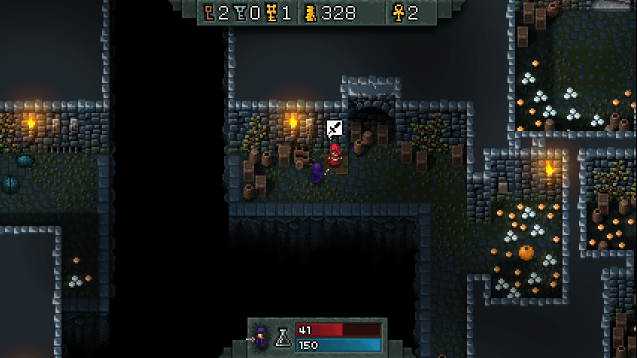 Before there was Castle Crashers, there used to be a little game called Gauntlet that was every gamer’s pure dungeon dream. Even though the Gauntlet series fell by the wayside sometime after 2005, most have never forgotten its old-school charm and stylized gameplay; and luckily for us, some of those super fans went on to develop video games of their own!

Hammerwatch is an upcoming Gauntlet-inspired hack-and-slash action adventure that’s currently seeking approval on Steam’s Greenlight program. In the game, players are tasked with killing hordes of different enemies, in a quest to reach the top of Castle Hammerwatch and reap the rewards. The game boasts some truly endearing pixel art, and it looks to provide some serious fun as you slash your way through archer skeletons, avoid deadly floor traps, and uncover secret corridors for a little extra gold.

But while the Gauntlet games were often filled with mindless hack-and-slash carnage, Hammerwatch promises to have more complex levels and strategic boss battles, with environmental puzzles that really make you think. Hammerwatch will feature 12 levels divided between 4 acts, and 4 different character classes with unique features and skill sets. From the looks of the trailer, the classes seem to include a knight, an archer, a red-robed wizard, and a purple-robed mage. There’s also a wave-based survival mode and a hardcore difficulty setting, in addition to the regular game. But hands down, the most exciting feature is the online 4-player co-op capabilities, because what good is a Gauntlet game without being able to crawl through the dungeons and steal the best loot from three of your friends?

Set for release sometime in Q2 2013, it’s clear that Hammerwatch will be a strong contender in the battle for Greenlight approval. But don’t just take my word for it! The quickest glance at the game’s Greenlight page will net you pages upon pages of enthusiastic and humorous comments from fans, such as “SHUT UP AND TAKE MY MONEY!” and “You had me at Gauntlet…” My sentiments exactly.

Click here to vote yes for Hammerwatch on Steam Greenlight

After Burner Climax soaring on over to iOS