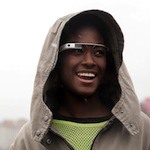 The first shipments of Google Glass are being delivered to a lucky thousand few fans and developers.  And so far, the initial impressions are that this could simultaneously be as much a fad as the Segway and/or a new platform in the making like the iPad (the big VCS who formed the Glass Collective are clearly betting on the latter).

Surely, games will play a big role in the success of Google Glass, and vice versa.  The question is, how?

The most obvious impact is that Google Glass blurs the lines between life and games.  As Kotaku has observed, the promotional video for Google Glass shows how wearing them and turning the camera on turns everyday adventures (if you like to bungee jump or ride parachutes) into a video game:

Of course you can do the same now  with GoPro camera, with the added advantage of a lower price tag, better resolution, and it’s waterproof.

The first is of a Google employee wearing Google Glass while go-karting, which makes him look like a character in Mario Kart.

The second is a recording of Lord of the Rings Online gameplay, complete with commentary by the Glass wearer.

I can definitely see how Google Glass might make sharing gameplay videos and broadcasting competitive video game events even more mainstream than it is today.

But, the biggest impact of Google Glass should be around augmented reality gameplay.  Not just making everyday life feel like a game, but blending it completely.

There have been many attempts by game developers to tie real life into gameplay on the mobile phone, with geo-location and the gyroscope, but nothing has attained mainstream success on the level of Angry Birds or Clash of Clans.

Because Google Glass sits on top of your head and gives you a natural first person viewpoint, it should make alternate reality more natural.  For example, imagine an endless runner game like Temple Run where you are actually running.  The question is how do you make it as fun as pretending to run away from angry monkeys? And how do you monetize it? You can’t pay coins to keep playing and improve your shortness of breath.

Google Glass has the potential to bring augmented reality games closer to the mainstream, but first it needs to be cheaper, developers need time to play with it, and it has to be determined how you make money with it.

Big questions – but these were the same questions that came about the day the iPad was released, and look how well that worked out for games.

Final thought— maybe because I’m moderating a panel at the Social Casino Summit in San Francisco next week and I have gambling on my mind — but I think Google Glass having a big impact on gambling. Imagine how a card-counting app in Google Glass could change the odds at blackjack table?  It’d be HUGE!  That is, until Vegas figures this out, and forbids Google Glass from entering the premises of any casino.

The economics of mobile game publishing

Indiegogo Picks: Ghost of a Tale