Home / News / Get Virtual Reality on the Go (Maybe) with Vrizzmo

Get Virtual Reality on the Go (Maybe) with Vrizzmo 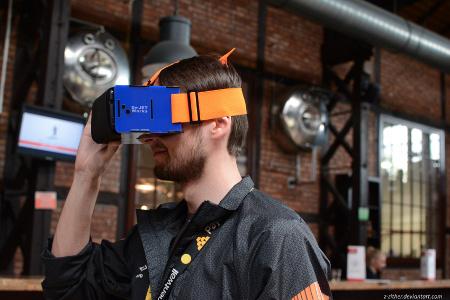 Head-mounted displays are the future of gaming! Maybe. I don’t know. Anyway, the Oculus Rift is $350 which, last I checked, is more than $65.

That’s about how much De JET Work’s Vrizzmo harness (what a name) will cost. Basically, it’s a rubber strap you place your phone in and wear around your head. Specially designed games will show two slightly different images to each of your eyes and provide a stereoscopic 3D effect. Your phone’s gyroscope handles the head-tracking.

The devs at Oculus Rift have been very outspoken about how miniaturized, low-cost computer parts made their product a reality. The Rift itself is made primarily out of smartphone components, so it’s not a massive stretch to think a phone could handle the processing load.

It’s a cool idea, in theory, but there are some problems.

1)      The whole point of mobile gaming is that you always have your phone or tablet with you and can take it out and put it away in seconds. We’ve seen other peripherals, like controllers, poorly supported because such things negate that advantage.

2)      Cell phone gyroscopes aren’t very good – at least not compared to the custom-designed Oculus technology. It even took those cats, who were working on that problem specifically, a while to come up with something that worked. Head-tracking is hugely important as it’s what keeps up the illusion of “being there” and keeps the user from getting nauseous.

3)      Even though the Rift itself is made from mobile parts, the computing itself happens on computer. When working with 3D you’re effectively doubling every image that needs to be rendered at once. That would be a massive strain on a smartphone processor, which isn’t nearly as powerful as a high-end computer.

Smartphone technology improves every year. I could definitely see this being a viable product in half-a-decade or so, but for right now I’m skeptical. Still, virtual reality is incredibly exciting to me. Cheap, highly portable virtual reality is just gravy.

The Wolf Among Us returns May 27th