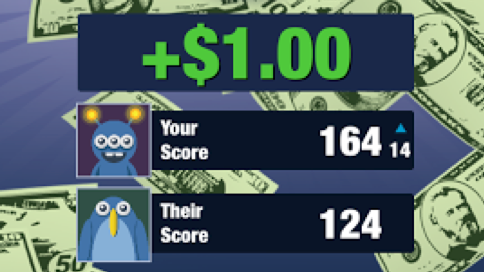 From the “it was bound to happen eventually” file comes this: a mobile games network that allows players to compete across a number of titles with real money at stake.

Android gamers may know about Skillz already, since the service has already been live there for a while. The big announcement today is that the “world’s premier cash tournament platform for mobile games” is now available on iOS, launching on the App Store with more than 150 games live right now. The company is promising thousands more from a wide variety of developers.

In a system not unlike online poker in its heyday, Skillz allows players to compete for free using a virtual currency called Z (a letter the company obviously really likes). Anyone who wants to play for real stakes can deposit real money and use it to enter tournaments that award cash prizes to the winners.

Before you get ideas of quitting your day job and becoming a pro mobile gamer, it should be noted that most of the cash prizes are pretty small. And there’s an obvious question that springs to mind: is it legal? The answer depends on where you live, but Skillz says that skill-based games for cash prizes are indeed okay in 37 of the 50 U.S. states.

As one might expect, many of the games already using the platform have a sports hook of some sort, but there are puzzle games, shooters and other genres represented as well. The incentive for developers to hop on board comes from the impressive incremental revenue numbers Skillz is seeing.

“While some of the most well-known and successful mobile games like Candy Crush are generating between $0.05 and $0.10 in ARPDAU, we have partners who have added three times that amount in incremental revenue through the addition of the Skillz cash tournament platform,” Skillz CEO and founder Andrew Paradise said in a press release.

Skillz has more information for interested players and developers online. And if either of those paths ends up making you rich, we can talk about something else down the road: a finder’s fee.

Ruzzle has scored a TV deal