Gardens of Time brings its hidden object hunt to the iPad 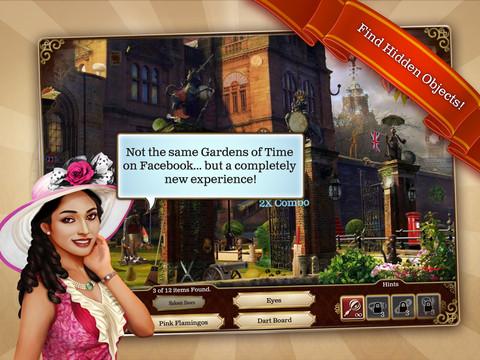 Hidden object games are big business. So much so that when they made the jump to Facebook earlier this year in Playdom’s Gardens of Time, it was a resounding success. Now Playdom/Disney are taking those gardens on the go, releasing Gardens of Time for the iPad.

“When Gardens of Time launched earlier this year, the hidden object genre was considered new to social gaming. Billions of hidden object game sessions later, the game is now one of the most popular titles on Facebook,” said John Spinale, senior vice president of social games, Disney Interactive Media Group. “Gardens of Time gameplay is perfectly suited for a tablet experience, and by giving our audience the opportunity to play on the go, we see an opportunity to engage with millions of players on an entirely new platform.”

And he’s not wrong – the iPad really does seem to be the perfect device for hidden object aficionados. With its big screen to display gorgeous scenes and its touch-sensitive nature letting you tap on every item you find, it’s no wonder that companies like Big Fish have embraced the iPad in a big way.

With Gardens of Time seemingly inspiring Zynga to create Hidden Chronicles for Facebook, could Zynga’s upcoming HOG be coming to the iPad too? It should be interesting to see if the big Z decides to follow suit.

Current Gardens of Time players should note, though, that this new iPad release doesn’t sync up to the existing game. Instead, they’re promising a unique experience that differs from what’s available on Facebook (which, loosely translated, sounds like “we have some different scenes for you to solve.”) Whether or not you see this particular element of the release as a good thing or a bad thing is up to you, but if you want to see what side of the fence Gamezebo falls on, be sure to read our round-up of the Worst Trends of 2011.

Ascension: Return of the Fallen now available as in-app purchase