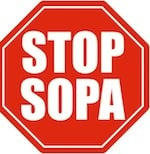 Obviously, Gamezebo is not shutting down today for the SOPA Blackout. We’re a fun game site and shutting down for political reasons is not fun. Also, I wouldn’t know how to turn the site black without shutting the whole site down technically (and that would really not be fun).

I would like to go on record that we are against the SOPA legislation being considered in US Congress and encourage anyone who believes in a free Internet to contact your representative today to voice your opinion.

The goal of SOPA in the House and the Protect IP Act in the Senate, which is to root out Internet piracy, is good. The problem is that both pieces of legislation has been written by big media company lobbyists and supported to members of Congress who think they are technically savvy because they know how to write 140 character Tweets to allow the government and corporations to shut down web sites which they accuse of copyright infringement with no judge or jury.

How does this affect Gamezebo? A game company could accuse us of posting a game that infringes their copyright, and our web host by law could shut us down with no warning, even if we are not in the wrong.

The truth is, this legislation could kill big Internet companies like Google, Reddit, Iamcheezburger, and Wikipedia and small ones alike (who can’t afford to lawyer up) and bring a level of censorship to the Internet not generally seen in the US. The intention of SOPA is good, but the legislation is painfully stupid.

OK, enough politics. Back to the Games!

ZeptoLab promises even bigger year for Cut the Rope, hints at more merchandising and expanded platforms