Home / News / GamesBeat 2012: The future of gaming, as predicted by Will Wright 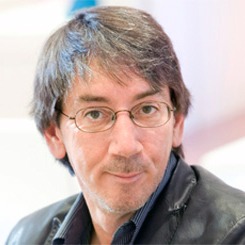 When Will Wright – creator of The Sims and SimCity – speaks, it’s always a good idea to listen. He’s a veteran of the industry, with a keen eye on the trends and trajectory of the medium. His keynote speech at this year’s GamesBeat event focused primarily on where he sees gaming headed (spoiler: a very great place), and he kicked it off with a crash course in history.

“One of the first guys who brought games to true relevance was a Russian general,” said Wright. The troops would practice and play out different scenarios, thus improving their ability to react to unforeseen events in battle. It may seem like an abstract way to begin a discussion about video games, but it ties in perfectly with one of the overarching points of Wright’s talk: Just about everything around us offers some sort of platform for playing or gaming.

Wright offered the Roomba as a prime example of this. It may be tasked with a menial chore like keeping your floor clean, but many people like to dress them up and personify them. “We’re also turning our pets into entertainment platforms,” he said, showing a slide of collars that enable dogs to talk (kind of).

From here, Wright went on to discuss forms of technology that started off as solutions to problems, but ultimately ended up as more platforms for entertainment.

“[Alexander Graham Bell] did not foresee the fact that teenagers would be texting each other to meet at the mall,” said Wright. “I’m sure [Alan Turing] didn’t envision little boys killing virtual Nazis on the PC.” This had the crowd laughing, but it also helped further demonstrate Wright’s argument that platforms for gaming and entertainment are ubiquitous. It’s something we’re seeing more of as time moves on, and a concept the youth of today was essentially born into.

“There’s a point now where we have a generation growing up who have as much emotional attachment to the virtual world as they do with the real.” Wright compared this to virtual reality, a concept many consider to be the future of gaming. It’s clear we’ll ultimately reach some facsimile of that experience, even if funny headsets aren’t part of the equation. Not surprisingly, Wright had something to say on that very subject.

“Reality is a platform for gaming, and we’re just now getting the ability […] to build games out of your actual life.” Here he cited the growth of metrics and the improved ability of developers to collect data on player activity – information which can be used to create a more personalized experience. And that, ultimately, is where Will Wright sees gaming headed: Down a more personalized path for the players, in ways that carry the potential to “meaningfully [change] the way we see our lives.”

It’s already happening on a small scale, with companies responding to player feedback and patching and improving games as they go. But there’s always room for more, and I’m anxious to see just how far developers will go with this concept of personalized games. Do you have any opinions on the matter? Let us know!