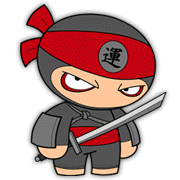 The annual Game Developer’s Conference took place in San Francisco earlier this month, and as always, dished up a whirlwind of game announcements and other exciting news. One studio that happened to be on hand was Montreal’s Gamerizon, better known as the team behind the popular Chop Chop series. They were there to show off their upcoming sequel Chop Chop Ninja World, but while chatting with Gamezebo, there was another announcement they were keen to let us in on. As it turns out, a Chop Chop Ninja cartoon series is in the works for the Canadian cartoon network Teletoon.

Recently we had a post-GDC chance to follow up with Gamerizon’s CEO Alex Sakiz about the animated series, and while there’s no official start date just yet, Alex had plenty to tell us about their upcoming television debut.

When we recently touched base with you at GDC, you had mentioned that a Chop Chop Ninja cartoon was in the works that would be debuting on Canada’s Teletoon network. How did this project come about?

About six months ago, we decided to make a sequel to Chop Chop Ninja. While the story was being developed, we immediately felt that this IP would represent a unique opportunity for a cartoon: With over 5 Million downloads, It already had a good following. It also had a rich storyline and we soon realized we could link unlockable content in the game to the actual viewing of the cartoon in a very holistic manner via QR codes or specific hints. So we went straight to pitch the idea to the networks and now, a full series of 52 eleven minute clips and 52 one minute clips is in production for airing, on Teletoon first and in many other countries soon after.

A number of other iOS franchises have hinted at the notion of cartoons, from Angry Birds to Cut the Rope, but this is the first time we’ve heard of a real concrete plan to air a program on a specific network. Why do you think that is?

I would say that the overall richness of Chop Chop Ninja World lends itself very well to a cartoon. We have a hero, a princess, good guys, bad guys, comic relief characters, action, treason, traps, puzzles, kingdoms, weapons, potions, construction, episodic content, etc. What the cartoon adds is the development of each character’s personality and depth, something that’s very difficult to obtain in a mobile downloadable game. The other element to consider is that Chop Chop Ninja, unlike the other games you mention, has a very narrow and very well defined core target group: Kids between the ages of 10 and 15. We thus provide a very good match for a network like Teletoon.

Are there plans to release the series outside of Canada?

Absolutely. We’re expecting the series to be sold in well over 100 territories. The universality of the game’s success will provide a great foundation in that respect. For example, this year, Chop Chop Ninja has been one of the most downloaded games in China, having even reached top app status twice.

Tell us a little more about how the TV show and the new game will be connected.

In our opinion, the whole idea of having a transmedia approach today is to create an internal ecosystem of what I would call “user migrations.” So if, say, 5 million players play the game in the US and you have an unlockable item that requires them to play a mini game on the network’s web site or to watch for a QR code in next Saturday’s cartoon, you’re actually migrating players back and forth between very different platforms and adding tremendous velocity to these platforms. You literally can double a website’s unique visitors or the audience of network’s specific time slot! And so, tie-ins both ways between our game and the TV show will be numerous. Nobody’s done that, at least certainly not at the scale we’re looking at, and we hope to lead the industry in this novel way of integrating and disseminating transmedia content.

The Chop Chop series has touched on a variety of non-ninja themes, from space travel to sports to prehistoric times. Are there any plans these non-ninja characters to be a part of the TV show?

No, we intend to remain very focussed on a unique set of characters in both the Chop Chop Ninja World game and in the TV show. This said, there will be many characters at launch and the list will constantly grow. As in the cartoon, we intend to push new content very frequently to the game, possibly as frequently as every week or every two weeks, and new characters will constantly appear, sometimes in the cartoon first, sometimes in the game first.

Chop Chop Ninja World is scheduled for release this Fall. The TV series will follow a few months later.