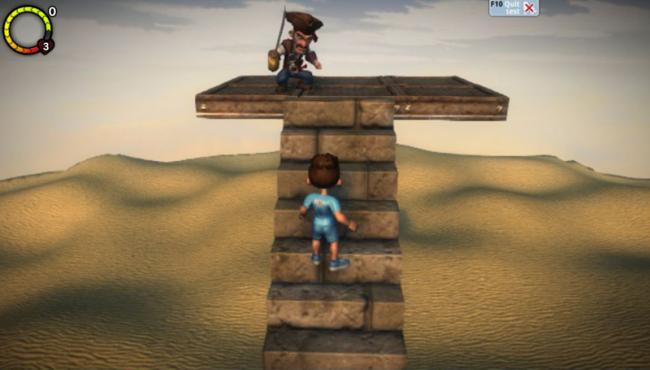 Gameglobe is a game creation engine and community developed by Square Enix and Bigpoint.  The browser-based builder launched in closed beta in summer of 2012 and is now available for open play by anyone with an internet connection.  This series will explore the features, benefits, and challenges of Gameglobe through the process of building a game from scratch.  In this week’s entry, we cover the basics of Gameglobe, build the first region of our game world, and find a new use for seagulls.

Gameglobe‘s primary appeal is the ability to create 3D action-adventure games with ease from the comfort of your web browser.  There is also a significant community aspect, and the option to play the games others have created—or even just play the games if you so choose.  While we have opted to explore the creation portion in this series, anyone with a free Gameglobe account can play the public, published user-created levels to experience the wide variety of options—and talented creators—available.

A free account will also give you access to a handful of very basic design choices, but only enough to provide a taste of what’s possible.  To enjoy the full spectrum of Gameglobe, including all 2,000+ items in their creation catalogue, a paid membership is required.  The cost ranges from $4.99 for one month to $30 for a year, which are the currently discounted, half-off prices.  This series will utilize the full membership catalogue; otherwise, we’d basically be able to create a game about a mute pirate who lives at the top of a flight of stairs.

And I already created that game, anyway.

The actual game editor is vaguely reminiscent of LittleBigPlanet, based entirely on a graphical user interface that allows drag-and-drop positioning of items and edits.  It also fits the “easy to use, hard to master” mantra to a tee.  Making large, significant changes to your game world can require as few as three clicks of the mouse, creating the illusion of progress in mere minutes.  It’s in fine-tuning those changes, and adding critical gameplay details—like buildings you can actually enter—that the challenge begins to scale. 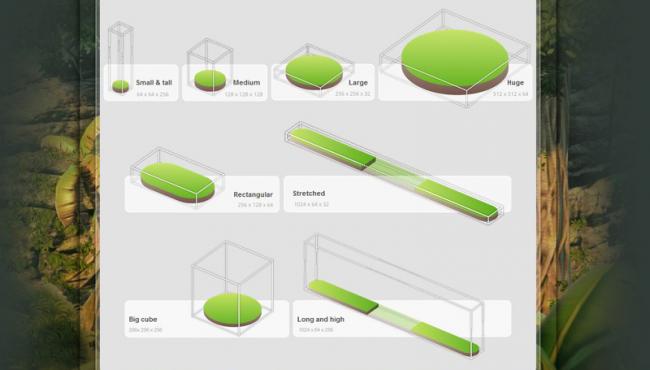 The “Stretched” map could also be called the “Crash Bandicoot.”

To begin building a new game, you’ll need to select the map structure for your world.  Most of the maps operate around a circular base of land with a designated height you can build toward, with a few skinny, elongated maps ideal for straightforward platforming.  We’ll be building on the “Huge,” 512x512x64 map that allows for tons of walkable area but little vertical growth.

There are a few physical aspects of Gameglobe levels that are worth considering when choosing your map: first, objects are not affected by gravity or land.  You can build a tree in mid-air or place a house buried halfway underground without any negative impact.  This means you could technically create a floating city, as long as your character—who is affected by gravity (and fall damage!)—can reach it.  Second, the land base for all maps is built on top of ocean.  If you dig a hole straight through your land, you’ll hit water every time.  Characters can swim, so this underwater layer is also a viable tool for travel.  Finally, the edge of the world is exactly that: as it comes, players can run right up to the end of your world and fall off.  If a wide open, end of the world area is not part of your game’s mystique, consider building a wall or terrain blockage around the edge. 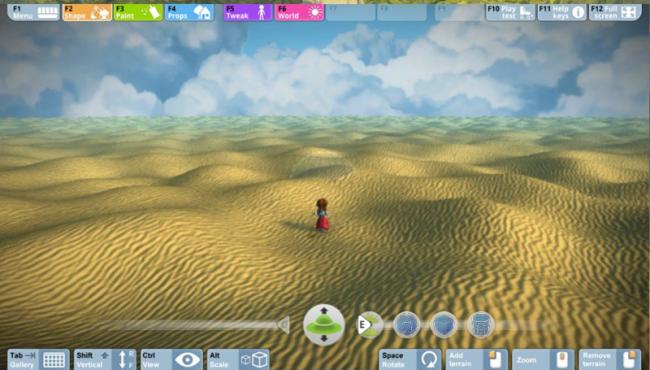 Your blank canvas of desert and sky.

With these details in mind and our map chosen, it’s time to actually start building.  Upon first beginning a new game, your world is a large, flat, desolate desert wasteland.  Gameglobe‘s current set of props and items available come assigned to a number of themes that can help determine the direction you’d like to take your setting: Pirate, Suburbia, Zombie, Winter, Jungle, Colonial, and Mercenary.  There are also a few holiday-themed packs containing mostly decorations, such as Easter eggs and Halloween candies, but the bulk of your world will be built from the objects and landscape available in the main packs.

I wanted to embrace the action-adventure aspect of Gameglobe for this first attempt while trying out as many different themes and landscape tools as possible.  I also wanted some objective measure of success—although that pirate staircase game is obviously a huge hit—so I decided to recreate an existing game world using Gameglobe‘s tools.  The obvious choice was making Hyrule from The Legend of Zelda: A Link to the Past, a highly recognizable action-adventure with a huge variety of ecosystems (and one of the greatest games of all time). 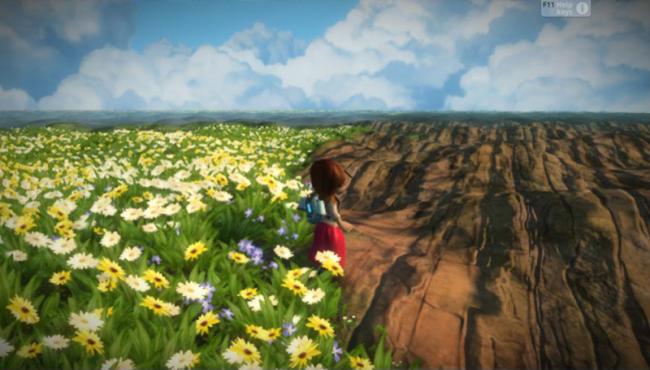 To make that giant plain of empty desert a little less intimidating, I used the Paint tool to spray general region guidelines across my map.  Paint allows you to change the landscape covering on any sized area with a single click.  There are an impressive number of landscapes available, ranging from flowered grass to ash to, for some reason, cheese.  My regions are currently denoted by the landscapes jungle, red sand, flowers, sandstone, oily concrete, vines, and ocean floor, but these can be easily updated at any time.

Having played around with the tools briefly before diving into Hyrule, I felt that the prop-heavy Kakariko village would be the easiest place to begin building.  With a mostly flat surface and lots of houses, I would just need to select and arrange items in a roughly village-shaped order.  While there are a number of different buildings and even houses available in the prop catalogue, I quickly learned that you cannot edit the buildings’ shape or roof color, only the paint job to a handful of pre-assigned options.  The typically red- and blue-roofed buildings will have to settle for brown shingles for now. 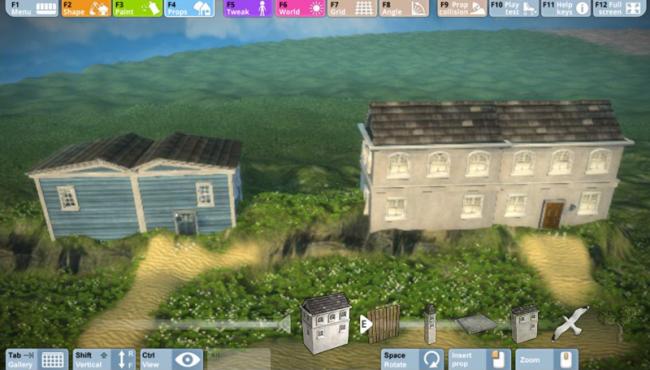 The Elder’s house and Blind’s hideout sit on a small hill above the village.

I do appreciate, however, that props can be placed anywhere on the map, including inside it.  Blind’s hideout would look strange standing as tall as its neighbors’, but dropping it halfway into the ground as a shortening measure was a simple task.  The same is true for the colonial tower that is acting as the base for the bird statue.  Speaking of: there are, not surprisingly, no stone birds available in the catalogue, but a seagull with its power turned “off” is currently filling in nicely.  With its power “on,” the seagull would fly around, unstatue-like. 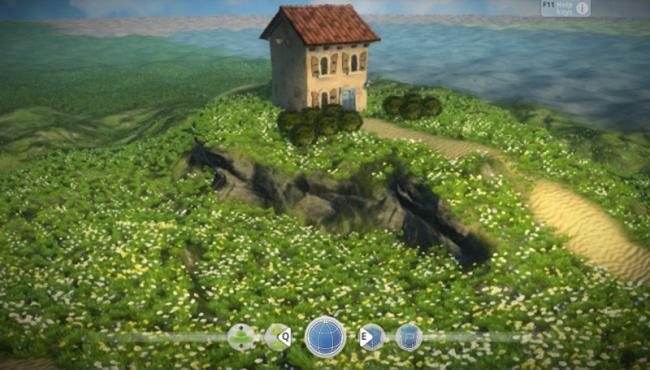 Link’s house, where our adventure will (eventually) begin.

Although some houses and scale have been sacrificed for the sake of space and sanity, one building we can’t overlook is Link’s home.  Link lives on a small plateau just east of Kakariko village, and Gameglobe‘s terrain tools thankfully contain a plateau option.  A little gradual sloping quickly created a path up the plateau.  I saved the red-roofed Spanish colonial house specifically for Link’s abode, which is completed by a few shrub bushes out front. 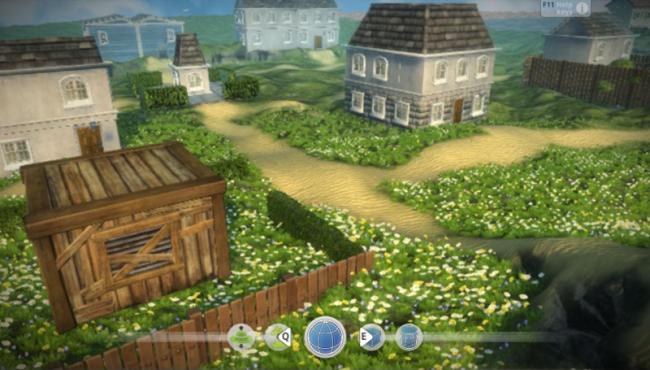 Currently missing: that jerk woman who always calls the guards on you.  Also, chickens.

Some roughly painted beach landscape makes up the village paths, which will need to be refined in a later pass.  Although the paint tool is exceptionally easy to use, it is spherically shaped, making creating straight edges a challenge.  The southern edge of town is connected to the northern mountain range of the Desert of Mystery via a large slope, an inaccuracy that pains me deeply, but is necessary for faster travel.

Including the early learning curve, tutorial-watching, and catalogue browsing, creating Kakariko village took a few hours.  In next week’s Gameglobe diary, we’ll terraform Death Mountain and the Lost Woods, and try to find a suitable enemy replacement for octoroks.