Home / News / Gabe Newell can buy and sell you 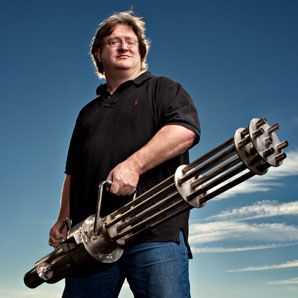 It’s no secret that being the head-honcho at a major video games company can make you a very wealthy person. We already know that Cliff Bleszinski owns at least one Lamborghini, and we imagine big-shots like Shigeru Miyamoto and Ken Levine are doing just fine too. Still, those guys may be mere peasants when it comes to Valve’s Game Newell, who Forbes magazine has just ranked as the 854th richest person on the planet.

According to Forbes, Newell has a net worth of roughly $1.5 billion, which is pretty impressive. Of course, it helps that Newell is running the company which has created smash hit franchises like Half-Life, Portal and Left 4 Dead, not to mention Steam, which is the premiere service for downloading PC games. In fact, it’s estimated that over half of Valve’s revenues come from Steam, which has managed to consistently dominate the PC gaming space.

The craziest thing about Newell’s ranking is that it may be too low and Forbes may have undervalued him. Since Valve is a private company they don’t report earnings, and Newell has always been very quiet about how much money he makes. So, Forbes poked around with bankers, analysts, insiders and others to try and estimate the value of Valve as a whole. Conservative estimates placed the company at $3 billion (Newell owns over 50 percent of Valve), but that may be missing the mark by millions or even billions of dollars.

The moral of the story is stop bugging Gabe Newell about Half-Life 3, because he literally has enough money to build a giant death laser on the moon and vaporize any who displease him.