Free downloadable guide now available: Why Video Games are Good For You 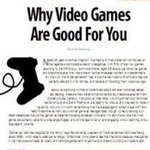 Video games aren’t just fun to play; they can also be good for you. Video games can improve hand-eye coordination, they can foster storytelling skills, and they can even make operating basic technology a less intimidating task—a very important point in today’s digital world. Some adults, however, are concerned about the potential downsides of playing video games in excess, and block their kids’ access to them.

That’s why Scott Steinberg, a high-tech parenting expert, has been working on a series of free books that aim to help parents make smart choices about their children’s gaming and online habits. His latest guide, Why Video Games Are Good For You, is a free downloadable PDF that outlines the reasons why video games are, well, good for you.

Steinberg’s guide cites findings from recent studies, including Harvard research that states playing games in moderation can improve a kid’s problem-solving skills, as well as help them develop socially and physically. Another study from the Office of Naval Research (ONR) found that playing video games as an adult can help you process information faster, and open the door to creative problem solving. And Dr. Jeffrey Taekman, the director of Duke University’s Human Simulation and Patient Safety Center, says that the future of education lays with serious games, simulators, and virtual environments.

Dozens of experts and organizations have loaned their voices and statistics to Steinberg’s works, which can be found on his parenting expert website. Steinberg’s research on the benefits of games outlines a common rule about gaming that parents and politicians alike seem to forget: moderation is key.

Can a kid get carried away with a game? Sure. Kids run at full-tilt all the time. But is that a reason to pre-emptively ban him or her from consoles forever? No, and given the rapid merging of education, communication, and games, enforcing such a ban borders on impossible. A kid can just as easily chuck his or her homework in favor of riding bikes, or playing ball. It’s simply up to the parent(s) to lay down ground rules about gaming from day one.

There’s also the matter of said politicians and parents ignoring the ESRB in favor of making direct complaints about violent video games, in addition to attempted bans. Games are rated according to content, and that rating system is clearly outlined and advertised online and offline. There’s no excuse to be ignorant of it, and there’s even less excuse to hold onto the belief that Mario games are somehow just as violent as Call of Duty.

What’s Not to Like? Service Games Just Keep Getting Better