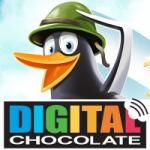 You know the famous saying: life in the social games business is like a box of digital chocolate; you never know what you’re going to get. Or when you’re going to canned, as the case may be. In an unsettling development for one of the space’s hottest companies, we’re getting wind of big shakeups at the studio founded by industry legend and EA mastermind Trip Hawkins. We’re talking multinational closures big.

In a post made to the Digital Chocolate company blog today entitled “Note from Trip” (and missing the subtitle “understatement of the century”), Hawkins succinctly packaged his own departure with the official statement that he’s “transitioning now into a consulting and advisory relationship with Digital Chocolate.” And while his relationship status may be more aptly described as a breakup on friendly, mutual terms, word has it that as many as 180 others at the company are parting ways a little less willingly.

According to a source close to Techcrunch, Hawkin’s follow-up statement – that the company is looking to “get more streamlined” – translates into sizeable layoffs and closures across many of Digital Chocolate’s offices. Specifically? “Half the staffs of both the Bangalore and San Mateo offices; the closure of Digital Chocolate’s Mexicali office, an office in Armenia and… offices in Bothell, Washington, and St. Petersburg.” A follow-up tweet from a manager at the Mexico base of operations confirms the closure, indicating unfortunate reliability to the number given to Techcrunch.

Interestingly, Hawkins goes on to dedicate much of his post to commemorating the coincidental 30th of Anniversary of his most well-known venture, Electronic Arts, reaffirming his mission of “helping game developers to prosper so that they can make better games for the public,” and promising to “remain involved in digital media.” With that said, it’s never exciting to see hardworking and talented industry members find themselves in scary positions, without work, and our best goes out to those affected by the layoffs. We invite anyone in the know to leave comments pointing out available work across North America and Europe, which we will gladly distribute through our Twitter and Facebook feeds.