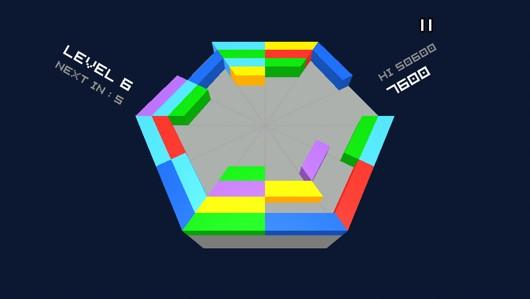 Theodore Reiker, creative director of Sine Mora developer Digital Reality, has formed a new studio called Prior Games. Although Reiker told Joystiq in an interview that the studio plans on releasing a new shoot ’em up in 2014, they plan to release several “microgames” for iOS in the interim. The first game, Rotolla, will be released next month.

Reiker described Rotolla as a hybrid of sorts between Tetris and Super Hexagon. A screenshot of the game can be seen below, and it isn’t too difficult to spot the ways in which both of the aforementioned games inspired it. Just to break it down, though–the gameplay takes place on a hexagonal playing field, and there are a variety of different-colored shapes.

But as potentially awesome as the game looks, the announcement that Akira Yamaoka of Silent Hill fame will be composing the soundtrack is perhaps just as awesome. What can I say? I love his music.

Prior Games plans to release a total of four smaller games this year, followed by three more the year after. The games are likely to vary greatly in style, but Reiker informed Joystiq that the studio intends to maintain a simple visual style in all of them. This is partly because the games were inspired by Nintendo’s bit Generations series, but mostly because Prior Games is a small studio, and would like to remain that way. How indie of them!

Magneto and Havok join the cast of Avengers Alliance