Flying on bullets: Halfbrick dishes on new content for Jetpack Joyride, and the future of Barry Steakfries (Casual Connect) 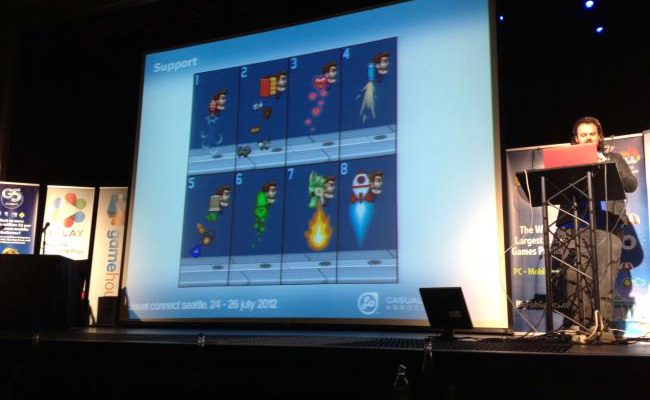 Since its release, Halfbrick’s Jetpack Joyride has done what the casual observer would call “well.” But let’s be honest: the casual observer doesn’t know what he’s talking about. This game has been downloaded over 35 million times, won a design award from Apple themselves, and captured the hearts and jetpack-loving minds of mobile gamers everywhere. That’s a lot more than just “well.” So take that, casual observer! Whoever you are.

But the story often ends there. A game does spectacularly, becomes part of the public consciousness, and the story behind how it got there tends to get lost. Fortunately, Halfbrick was here in Seattle at this year’s big mobile and social bash, Casual Connect, to shed some light… and so were we! Speaking to a packed room, the company’s cheery Chief Marketing Officer Phil Larsen told crowds about the journey of Jetpack Joyride from concept to killer app, and dished on where Barry Steakfries is headed next.

Beginning its life as Machine Gun Jetpack, their current mega-hit was borne of an in-game item from that other Halfbrick endless runner, Monster Dash. Elucidating things for the audience a little bit, however, Larsen revealed that there’s a subtle story that’s been mounting in what may be the world’s most subtle trilogy. 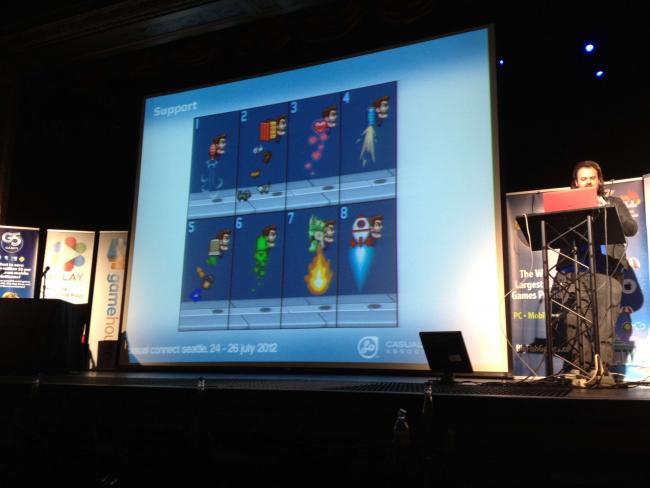 He was scant on details, but noted that close observers will see a reverse timeline in Jetpack Joyride, Monster Dash, and the first adventure in the “Barryverse,” Age of Zombies – involving the discovery of the fabled jetpack, and Barry’s journey with it from laboratory all the way into the future. The mysterious figure behind it all? Legitimate Research, the company responsible for the many gadgets added in the game’s most recent update. Where Barry’s headed next, we don’t know, but it’s a safe bet to say Halfbrick is planning a big reveal in the form of a game centered around this not so legitimate group of scientists.

In the mean time, Gamezebo managed to get a sneak peek at what‘s next for Barry’s time inside the lab, when Larsen showed the audience one of the many ways the team plans to continue supporting Jetpack Joyride. In the works? A series of hilarious jetpacks that include a doghouse spewing puppies, an 8-bit throwback made entirely of pixelated holograms, and a whoopie cushion whose sounds we don’t want to imagine.

Gamezebo has got in touch with Phil in hopes of scheduling some time to pick his brain on the history of Legitimate Research, and how deep the rabbit hole goes, so stay tuned to this space for all our Casual Connect coverage, and more about Jetpack Joyride!