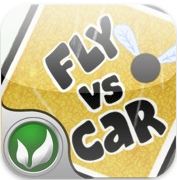 People don’t generally associate video games with charity work, but that doesn’t mean gamers haven’t done their share of good in the world. Last fall, for example, FarmVille raised nearly half a million dollars for the children of Haiti. More recently, Crowdstar raised funds to help animals affected by the Gulf oil spill. And earlier this summer industry veteran Masaya Matsura announced that his first iPhone game would published by OneBigGame, a non-profit publisher that raises funds for children’s charities. Now developer Snow Day Games is getting in on the giving action, donating 50% of the profits from their new game Fly vs Car to Child’s Play.

Started by Penny Arcade founders Mike Krahulik and Jerry Holkins back in 2003, Child’s Play is a charity intent on improving the lives of sick kids around the world by donating toys, games and books to hospitals. In 2009 alone they were able to raise more than $1.7 million. The developers at Snow Day Games want to do their part to make sure 2010 is even better.

“Fly vs. Car is a fun, casual game for players of all ages and that fitswith our goal of making a game that can do good in the world for children,”said Matthew White, chief creative officer of Snow Day Games. “As playersdodge traffic in homage to Frogger and other great games where you avoidgetting flattened, they can also know that their gaming is helping others.”

Fly vs Car is available for 99 cents on the iTunes App Store starting today. For more information on Child’s Play, or to donate directly, visit childsplaycharity.org.