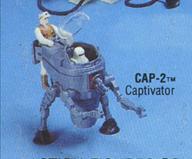 Earlier this year THQ Wireless, the publisher responsible for a myriad of Star Wars games on the iPhone, announced that they had tapped developer FluffyLogic to introduce tower defense to a galaxy far far away. With the release of Star Wars: The Battle For Hoth only days away, Gamezebo has reached out to the team at FluffyLogic to pick their brains about working in the tower defense genre and what it’s like to flex your muscle in one of science fiction’s most popular franchises.

In an interview with 148apps, you had mentioned that this project started when a THQ representative asked you what you’d do if you had the Star Wars universe to play in. Did you come up with any other ideas before deciding on The Battle for Hoth?

We did have a few ideas along with the team at THQ Wireless, but given the 30th Anniversary [of The Empire Strikes Back] was on the horizon, and that the Battle of Hoth is one of the most classic battles in sci-fi history, it was hard to resist. However it was still a difficult decisions – the Star Wars universe is such a rich environment. THQ wireless really gave us a lot of freedom creatively.

For the record, I’d have paid good money for a tower defense game set during the trench run on the Death Star. It has towers, it has trenches – this thing practically writes itself.

As we said above, we have a large scrapbook of ideas, and we have certainly considered space-based tower defense – it’s a strong idea and who knows…

Were there any units, settings, or scenarios that you wanted to include that simply didn’t make the cut?

There were a few units that came out as toys that were not in the film – the ones we all had as kids, such as the CAP-2 Captivator or the MLC-3 Mobile Laser Cannon. In the end we kept it pretty classic with a few slight variations; such as having TIE Fighters coming down onto the surface and taking on a ground-attack role! There are some classic units that do not appear in this version, but who knows what the future holds…

FluffyLogic was previously responsible for the critically acclaimed tower defense game Savage Moon on the PlayStation 3. Are there any lessons learned from developing Savage Moon that you’re bringing to The Battle for Hoth?

Games development is an inherently incremental process – you can’t make games without the experience of how it went last time staying with you. That said, The Battle for Hoth is a different game to Savage Moon and working on an iPhone meant we needed to approach the game with fresh eyes. The device and its controls massively influences how the game is played and we spent a lot of time considering the interface and experimented quite a bit before settling on the final one. 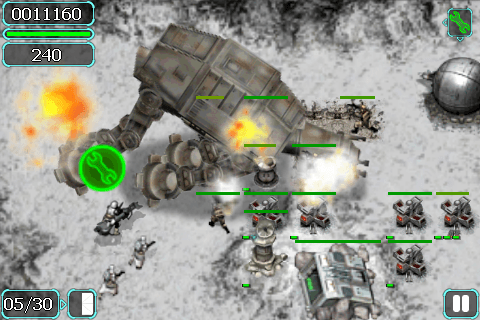 What would you say the biggest differences are between developing TD’s for handhelds and consoles?

The obvious differences are the graphics and audio, but consoles are generally far more powerful machines. On handhelds you have to be much more disciplined about how you use the resources you have at your disposal, but we believe that can be a positive thing since it makes you consider what is really necessary. Also, we have to remember that this is a mobile-platform, the experience for the player should be much more pick-up-and-play – but without compromising the overall gameplay experience.

If you could recommend one tower defense game on the iPhone that’s not The Battle for Hoth, what would it be?

Well, there are some great TDs on the iPhone but one of the games we really love at FluffyLogic is Plants vs Zombies. Lots of fun and great graphics.

Lambs and HOGs: An interview with Codeminion