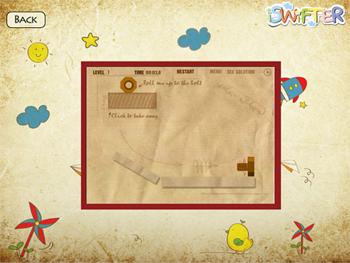 Where some people see problems, others see opportunity. Take the folks behind iSwifter. While most iOS developers have been in a huff over Apple’s refusal to allow Flash on their devices, the iSwifter team saw this as a challenge. How do you get Flash games onto an iDevice without actually using Flash? The answer, according to the newly launched iPad app iSwifter, is “streaming.”

Launched by YouWeb, the same incubator responsible for OpenFeint, Crowdstar, and Sibblingz, iSwifter is set to bridge the gap between flash-based web games and mobile devices.

The idea works not unlike OnLive. Flash games are stored in the cloud and streamed to iSwifter gamers, so no Flash code actually takes place in the App, meaning it in no way violates Apple’s strict anti-Flash policies.

“We are targeting the much larger user base of casual and social gamers who want to consume gaming content on-the-go”, says Rajat, creator of iSwifter, along with his co-founder, Rohan. “As more mobile devices hit the market, there is no reason why game developers should be locked out of the hottest handsets.”

Everything about iSwifter sounds great on paper, but at the moment its execution fails to impress. The game selection right now is anaemic at best, showing off a single “game of the week” option from four different providers. The games themselves are choppy and sluggish, with frame rates akin to a seizure. And since there seems to be no option to log into things like your Kongregate account, your progress can’t be saved, nor can site-specific enhancements like achievements be earned. All in all, the current release of iSwifter feels more like a tech demo than a full release.

Still – as a tech demo, it’s at least a solid proof of concept. Not only does iSwifter prove that they can stream web-based Flash games running on an iDevice – they’ve proved the can do it from any number of sources. With games streaming from AOL Games, Kongregate, Yahoo, and Facebook all streaming already, and the promise that iSwifter “can support any gaming portal,” this could truly be the simple solution that Flash developers have been praying for.

“iSwifter represents a game-changer forsmaller Flash game developers that don’t have the resources to port their gamesto multiple mobile platforms like iOS and Android,” says Net Jacobsson, aformer Facebook executive,advisor toKing.com, andfounder & CEO of Playhopper. Crowdstar CEO Niren Hiro agrees. “Bringing existing games to mobile platforms with no changes can be a huge time to market advantage. Even for large developers like Crowdstar that havethe resources to develop native versions of social games for mobile devices,streaming Flash games from the cloud using iSwifter is an excitingalternative.”

If they can get things streaming smoothly and beef up their game selection, iSwifter may quickly soar to the #1 spot on the App Store. The team is also promising 3G network support, iPhone and iTouch versions, and says that Android phones and tablets will be supported later this year “if the market demands.”

Own an iPad? Why not give it a try for yourself. iSwifter is a free download on the App Store.