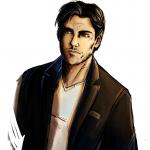 The waiting is the hardest part of post-Kickstarter anticipations, especially when the game you’re waiting for is the spiritual successor to a series left untouched for nearly fourteen years.  Fans of Jane Jensen and her Gabriel Knight trilogy find consolation in knowing Moebius will be made, but an assured future existence does little to quell the hysteria-inducing impatience of “I want it now!”  Luckily, a brand new trailer and website should help ease your Moebius anxiety.  Or make it worse, but that’s a risk worth taking.

In the world of point-and-click adventure games, Jane Jensen and Gabriel Knight in particular are known for engrossing players in epic and superbly developed plots, fueled by the protagonists’ relationships to each other and the expansive game world, which is filled with intricate and devilishly clever puzzles.  Moebius looks on track to follow in these much-revered footsteps, placing players in the shoes of genius antiques dealer Malachi Rector as he is hired to investigate the death of a woman found hanging from a bridge in Venice.

As in Jensen’s most recent adventure, Gray Matter, Malachi will travel to numerous real-world locations, from Venice and Paris to Zurich and Washington, D.C.  Over the course of his investigation, Malachi learns that this woman—and he himself—have more meaningful roles in the course of history than initially expected.  The lines of that history, and time and space itself, begin to blur as Malachi uncovers and begins to alter the truth.

This first glimpse of Moebius in action shows off a beautiful game world—with at least 50 rooms and 20 hours of gameplay anticipated—that is both colorful and gritty in a graphic novel style.  The exceptional voice work we’ve come to expect from Jensen’s adventures is also back (although sans Tim Curry).  Each scene is fully explorable, with items receiving a separate icon meter for specific interactions and puzzle solutions.  These solutions can be experienced through one of two difficulty modes—”casual” for the beginner, or “true adventure” for veterans of the genre who enjoy the logical leaps that make others’ brains boil.

Although this trailer provides more salivation than sustenance, the additional good news is that a playable demo of Moebius will be available in time for E3 2013 this June.  Even though two months seems like forever from now, just remember: it’s much closer than fourteen years.