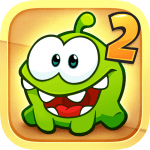 Zeptolab are masters in the art of teasing. We’ve known that Cut the Rope 2 has been coming for a long while now, and every so often they pepper their fans with hints and clues and cute animations about what we might expect in the sequel. But we haven’t had anything concrete to go on until now.

This morning, one week before the game’s December 19 release, Zeptolab finally gave us a sweet sweet taste of upcoming candy.

As you can see in the video below, Om Nom is now joined by some friends – the Nommies – who all have a vital role to play in his candy acquisition enterprise. The gameplay looks fairly in line with what you’d expect from the series, though the new twists added by his friends may be enough to give the formula a healthy dose of vitamin fresh. Find out first hand when the game launches next week.