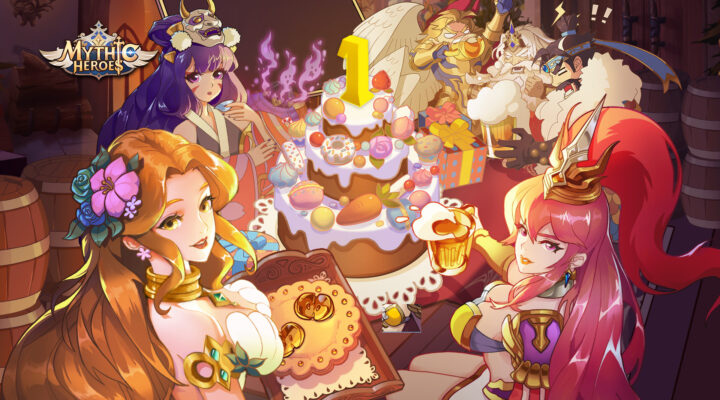 Mythic Heroes, the popular AFK Idle RPG, celebrates its First Anniversary! And to celebrate, the developers are handing out a host of rewards, new rankings, exclusive items at the Marketplace, and events that give players the opportunity to earn additional rewards.

As a quick reminder, Mythic Heroes is a game where players create a team of Gods and Heroes to fight in a war against the Shadow. Players can enhance their character’s skills and abilities, unlock new weapons and prepare for battle. The one-year anniversary of Mythic Heroes sees the return of the Fireworks Festival. Fireworks can be collected by completing daily quests. Launching them into the sky means that players can earn Fortune Bags, which can then be spent on items in the exclusive event store.

Another major event to celebrate the first anniversary of Mythic Heroes is the Kingdom Raiders team battle.

Rewards will be distributed based on how many squares your team occupies at the end of the battle period. And once again, this can be put towards exclusive items from the event marketplace. This gold will be available to spend during the last two days of the event. Mythic Heroes is also offering a host of check-in rewards in the build-up to the anniversary itself. These include Summon Scrolls, Inherited Divinity, Fortune Chests, and Diamonds.

Then on the anniversary itself on September 6, players will be able to claim Hero Shards, Skin vouchers, and an exclusive Anniversary Avatar Frame.

The game is available on both Google Play and App Store, download it for free right now! For further information and updates, follow the official Mythic Heroes page on Facebook, or on their Discord.

You can now pre-register for Bloodline: Heroes of Lithas in Europe