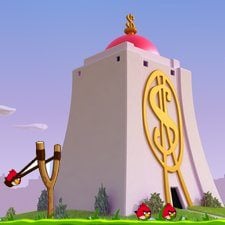 You know how you and your friends are always kicking yourselves for not coming up with the idea for Angry Birds? Well kick a little harder, because Finnish newspaper Arvopaper is claiming that Rovio, the company that made the game, is worth over 6 billion dollars. How did they come to that number? Well that’s the thing… We don’t really know.

It is notoriously difficult to predict the value of private companies due to the fact they are not required to disclose financial records the same way publicly traded companies are. The reason we know what Apple, Google and other giant corporations are worth is because they’re required to open their books to the public. Private companies like Rovio face no such laws, and you’ll never hear a private company broadcasting their worth openly because it would drive down the prices of other parties seeking to buy them out.

So how did Arvopaper arrive at the magic $6 billion figure? Well they’re assuming that the company’s total sales will fall between $300 and $500 million in 2012, and believe Rovio to be such a hot commodity that it could fetch up to 20 times its current value at sale. Rovio has already claimed that they earned $100 million in sales in 2011, so Arvopaper’s predictions may not be far off. And we can’t forget that Zynga reportedly offered $2.25 million for the company last year, but Rovio said no.

Still, without any concrete sources and the abundance of speculation and shady math we’re taking this with a very large grain of salt, and recommend you do the same.

GameHouse FunPass Is now available on the Mac