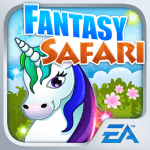 It wasn’t that long ago that we heard about Battlefield 3: Aftershock being removed from the App Store, and subsequently being shut down as of March 31st. The game was panned by everyone (including us), cited as being a buggy mess and a dark mark on the Battlefield franchise. Even more recently however, we have learned that EA is planning to pull the plug on two more iOS games: the social releases Fantasy Safari and Ghost Harvest.

Fantasy Safari is a game reminiscent of Zynga’s Dream Zoo that allowed you to build a ‘safari’ of your very own, with magical animals and such. Unfortunately the game had a rocky launch with server issues, and it looks like it never fully recovered with a dedicated user base.

The other game getting the axe is Ghost Harvest, a game that appeared to take a page out of the Zombie Farm playbook, wherein you could plant tombstones and harvest ghosts out of them. You could even use these ghosts to take on reporters and ghost hunters that threatened your ghastly plantation.

As of now, all three of these games have been removed from the iTunes App Store. If you still have any of these games still installed on your device, however, feel free to play them until March 31st. After that, they’ll just be wasted space.