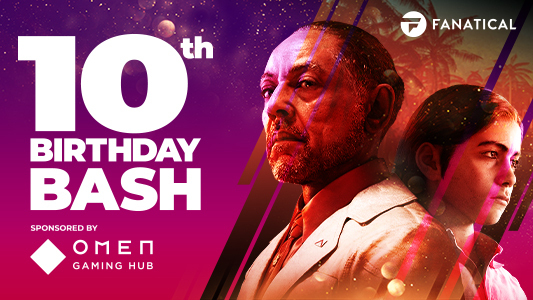 Naturally, it’s having a party, and everybody’s invited.

Sponsored by OMEN Gaming Hub, the Fanatical Big Birthday Bash consists of thousands of PC game deals from some of the biggest publishers in the world.

On top of that, Fanatical is running two flash deals per day throughout its prolonged birthday celebrations. They run from November 1st till November 13th.

And there are some top games in these flash sales. On day one you can pick up Monster Hunter Rise: Sunbreak at a 37% discount, and Assassin’s Creed: Valhalla – Complete Edition at 70% off.

Further down the line you’ll be able to pick up Far Cry 6 – Gold Edition, House Flipper, Detroit: Become Human, and a ton of other top games. Discounts range from 37% to a whopping 93%.

There’s a special Birthday Bundle, too. It’s a sort of cut-price greatest hits bundle containing some of the best games from bundles past.

Plus, Fanatical has thrown in a few more deals for good measure.

Finally, Fanatical is also running a huge competition during the event. Prizes include free games, an OMEN Laptop, a Steam Deck, a Nobel Chair, and more.

That, in case you weren’t aware, is some solid gear, with a total value running into the thousands.

To grab yourself a bargain at worst, and some shiny new toys at best, keep your eye on Fanatical for the next couple of weeks.