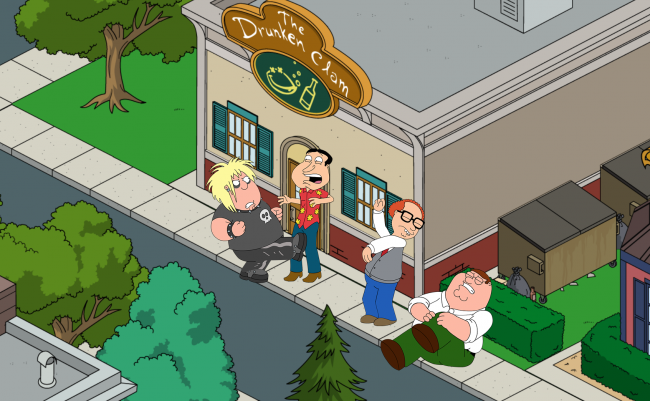 Isn’t it surprising that Family Guy has made it past the 200-episode mark without an official mobile game? TinyCo has been working with the voice cast from the long-running animated show and the brand experts at Fox Digital Entertainment to rectify this oversight, and the fruits of their labor will be available to all next week when Family Guy: The Quest for Stuff launches for iOS and Android on April 10.

Using the latest, particularly destructive donnybrook between Peter Griffin and Ernie The Giant Chicken as a backdrop, the game asks you to direct the Griffin family and their friends in an effort to rebuild Quahog. If that sounds like it’ll have builder elements, you’re probably on the right track.

But since this is Family Guy we’re talking about, the official press release says your actions could cause even more headaches for the town. While dealing with additional calamities, you’ll also be able to help Peter try to become a pirate, aid Quagmire in his hunt for Gold Digger Island and go on a road trip through the multiverse with Stewie and Brian. My gut tells me cutaway gags skewering other aspects of pop culture wouldn’t be a shocker either.

The success of The Simpsons: Tapped Out proves there’s an appetite for mobile titles based on Fox’s animated hits, even if the series’ approaches to humor are somewhat different. That game benefited from including the show’s real voices and creators in the fun, so it’s a positive sign that TinyCo is doing the same.

Look for Family Guy: The Quest for Stuff on the App Store or Google Play next week. It’s a free download, though it will have IAPs “for a variety of digital goods to speed up, decorate

or differentiate gameplay.” At the very least, it’ll be an alternative to all the violence in movies and sex on TV, right?

Clear Your Weekend: FTL and Hearthstone are now on the iPad