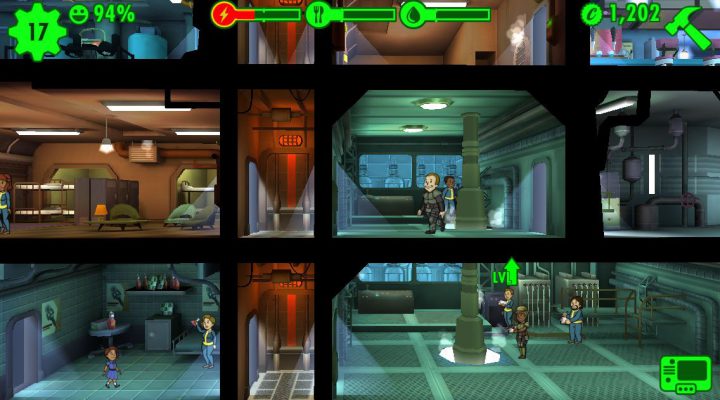 A surprise announcement at Bethesda’s E3 press conference on Sunday, Fallout Shelter was launched the same evening to the App Store as a free-to-play game set in the world of (you guessed it) Fallout. It’s a little like a souped-up version of Tiny Tower with deeper gameplay, and personally, I’m hooked.

So is everyone else, it would seem. The game quickly shot to #1 on the App Store’s free charts. Considering the combination of a popular franchise and a feature at gaming’s biggest annual event, I suppose this isn’t terribly surprising. What is surprising is the other chart it’s climbing. As of this writing, Fallout Shelter is #5 on the US Top Grossing Chart.

If you’re a market watcher, you’ll know this is kind of a big deal. The Top Grossing Charts rarely budge, so for a game to soar near its top in just 24 hours is essentially unheard of. It’s only behind Clash of Clans, Game of War – Fire Age, Pandora Radio and Candy Crush Saga respectively.

It’s an even bigger deal when you look at what Fallout Shelter is. Yes, it’s free-to-play, but it doesn’t once feel like a game that’s reaching into your pockets. The only timers in place present a risk/reward system and can’t be bypassed with an in-app purchase. Nothing can be hurried up. Nothing can be bought to give you a tremendous leg up. In fact, the only thing you can buy are card packs that dish out new items and currency in a totally random style.

Fallout Shelter’s monetization flies in the face of convention, and it works.

I’ve always been a firm believer in “monetize players by giving them what they want, not by telling them what they need,” and Fallout Shelter’s instant success only serves to reinforce that belief. Combine that with the absurdly powerful reach of an E3 press conference (last night’s Sony / Shenmue announcement actually knocked Kickstarter offline), and you’ve got a recipe for a mobile hit.

In other words, don’t be surprised if there’s a big mobile launch at every E3 presser next year.