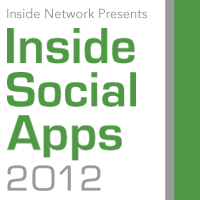 We’re live blogging from the Inside Social Apps 2012 Conference in San Francisco, from Philz Coffee a few blocks a way. While other attendees discuss and pretend to understand such industry jargon such as “velocity” and “ad mediation,” I sip my favorite coffee in the world and type away.

The big takeaways from the show so far: Facebook Credits conversion rates are much lower than expected and you need to spend a lot of money to make it big on the iPhone and Android platforms. If you are a small developer, life is tough.

The most revealing news was from the first panel of the day, where panelists revealed that Facebook Credits conversions were lower than anticipated. Kevin Chou of Kabam said he expected the conversion rates with Facebook Credits to go up 15 – 20% but instead they ended up 5 – 10%. Anil Dhami of Funzio said the move to Facebook Credits was “a wash,” with higher conversions but lower revenue per player. John Spinale from Playdom was also more gung ho on mobile users and their propensity to pay versus players on the PC (on Facebook).

This discussion was revealing not just in that the conversion numbers for Facebook Credits were much lower than I expected, but that these numbers were being discussed at all.

For a company that has a monopoly on social games distribution on the Web, I would expect the panelists who represented leading social game companies to be scared to reveal such numbers. But they weren’t, openly challenging Facebook to do better.

If this was a discussion about conversion rates on Apple, there is no way these numbers were have been publicized. This past week, while the controversy about game companies hiring marketing companies to use bots to inflate their download numbers, every company that contacted me did so off the record, in fear of “upsetting Apple.”

More than anything, this suggests that game companies view Apple and not Facebook as their leading distribution channel for social games right now. Game companies do not fear Facebook, but they tremble at the thought of upsetting Apple. And that’s more revealing then the numbers themselves.

Speaking of Apple, the best panel of the day was about mobile app distribution.

Kim-Mai Cutter, the moderator, opened up with questions about this past week’s scandel about using bots to inflate download numbers. Mihir Shah, CEO of Tapjoy, stepped up to plate and publicly stated that paying companies that use bots to inflate download numbers is wrong and kills the legitimacy of the marketplace. He’s the first leading industry person to go on record on this issue. Everyone else seems to want to pretend that it was not such big deal or that they were not doing it themselves, so I want to give him kudos for doing so.

The big takeaway I got from the panel is that now that you can no longer use bots to buy downloads and inflate your numbers for a fixed price ($10,000), the price to get distribution for your app has increased significantly. The panelists, all from companies that make money through distribution through ads (so obviously biased to a degree), said that app companies need to be committed to buy ads over the long run to keep their app in the coveted Top 25 Lists on Apple’s App Store.

You should focus on building a good app, they said, test out metrics, than spend to acquire users. That’s nice to say, but in reality, big companies like Zynga will price out everyone else (as they did on Facebook) and small game developers, who don’t have the resources to buys ads over the long run, much less analyze the metrics (you need a full-time help to do that), will not be able to afford this, and their games will never be discovered.

Mihir Shah called it the “have’s versus have not’s” marketplace. Tapjoy just removed their minimum bid to $.10 per user, which does alleviate, but not fully solve the problem.

Apple needs to change the metrics behind their Top 25 list in the same way Google has done with Android, so ensure that those companies who spend the most don’t dominate their top charts. This is an issue Facebook is dealing with now in their app marketplace (as seen through the fact that 12% of Facebook’s total revenues comes from one game company, Zynga). For a game marketplace for work, both big and small companies need an opportunity to compete. Many start ups are trying to fix this problem, but at the end of the day, it’s a problem with Apple’s App Store, and only Apple can solve it.

For the best coverage of Inside Social Apps, the best site is obviously Inside Social Games, since it’s their conference. The best tweeter today was Giordano Contestabile from PopCap Games (follow him for good insights and fun commentary). Tina Tran has a good summary of day one on the Girls in Tech blog as well.

Coffee’s done so I am out of here!