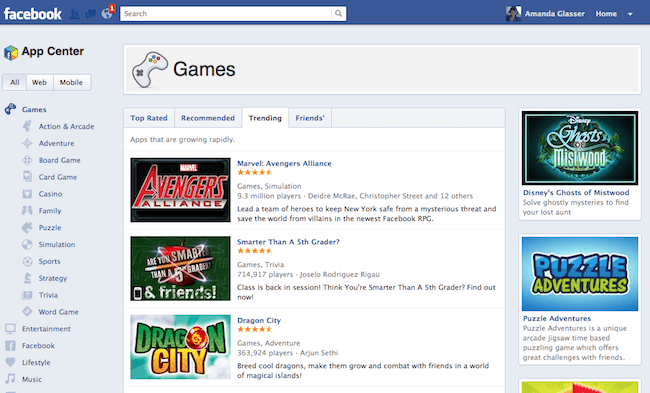 Early last month, we reported that Facebook was prepped and ready to launch their very own directory to help users navigate the chaotic waters of the site’s many apps and games. At the time, there was no formal word however on whether “prepped and ready” meant launch was four weeks, or four months away. Today – almost exactly one month since the reveal – Facebook flipped the switch on App Center.

And unlike the moment when they flipped the switch on their IPO (low blow?), I foresee the results here being much better! Right out of the gate, App Center feels clean, proves easy to navigate, and is built on a foundation that prioritizes logical discovery over playing “needle in the haystack.” And while a large part of this has to do with the natural advantage Facebook brings with an already familiar user interface, App Center’s strong points run deeper.

As was promised when the product was announced, Facebook’s app marketplace puts the development community’s best foot forward, offering up apps that are higher rated and played more actively. As a result, players looking for games, social tools, and leisure apps can arguably avoid the App Store and Google Play pitfall of sifting through countless clones, spam apps, and poorly crafted content. From here, Facebook utilizes your social graph to offer up apps that relate to things you’ve played before, and things your friends are using right now.

Refreshingly, all of this is reigned in by an elegant stack of menus which subdivide content into categories like Games, Music, Sports, Travel & Local, and Utilities, and further partitioned off into web, mobile, top rated, trending, and top grossing. Long story short? A host of ways to eliminate the things you aren’t looking for, all of it organized in a crisp, unfettered manner. This goes right down the to DNA of the individual app landing pages themselves, which prove more compelling in my opinion than App Store game pages, if only because of their familiar “fan page” look.

Now on one hand, the service is far from perfect. It’s missing a no-brainer search function, for example. With that said, even the beginnings of App Center represent a better organized state of affairs than Apple or Android’s hodge podge of content, all of it sorted by categories and monikers that seem to rotate each week. More importantly, with social graph features quite obviously not fully exploited, there’s tons of room for App Center to adopt a Netflix-style system using your already expressed hobbies, likes, and passions on Facebook to create a taste profile that dictates what shows up when you load each category, or visit from day to day.

And while there’s an argument for the idea that hiding poorly rated content drowns out diversity, I’d counter by asking any of you how many apps you rush to download when you see they’ve been given one, two, or in some cases three stars. An ecosystem where developers have to please players in order to be included in Facebook’s system of discovery and featured content is a win-win; for developers looking to put their name on quality content, and players tired of being duped into wasting their time. If Facebook’s learned as much from Apple’s foibles with their own store, however, they’ll quickly reign in security to ensure bot-farming and false upvoting doesn’t run rampant.

We encourage you to go visit Facebook’s App Center for yourself to tell us what you like best, or insist we’re crazy for enjoying it so much.