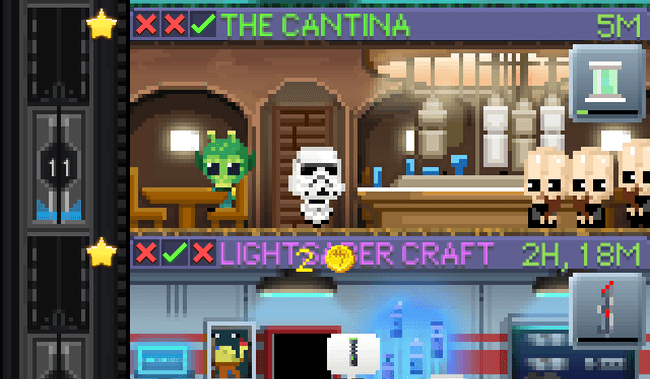 If there’s one thing that gets people talking around the mobile community these days, it’s the highly stylized and wildly addictive 8-bit experiences from developer NimbleBit, like Tiny Tower and Nimble Quest. Now couple that winning formula with a full-on Star Wars theme, and you’ve got yourself one serious contender for an all-out good time. Star Wars: Tiny Death Star has just gone live on the App Store and Google Play Marketplace today, but earlier this week I had the chance to speak with Jon-Paul Dumont, the Studio Director at Disney Mobile Palo Alto, and discuss everything from what it was like working with NimbleBit on this exciting new project, to what kinds of Star Wars fun and humor players can expect to find inside their own Tiny Death Stars.

The folks at Disney Mobile have actually been fans of NimbleBit and their impressive catalogue of mobile hits for quite some time, and according to Dumont, the idea for a possible collaboration with the Tiny Tower formula and LucasArts’ Star Wars license just seemed to materialize out of nowhere. Disney Mobile had come up with the name “Tiny Death Star” right off the bat, and loved how you could say that name to anyone and have them instantly understand exactly what it means. Yes, I think even Obi-Wan himself would go so far as to say that NimbleBit and Disney Mobile could not “escape their destiny” together.

The first thing that might come as a surprise to some Tiny Tower fans is that the team at Disney Mobile took over the actual developing duties here for Star Wars: Tiny Death Star, with NimbleBit stepping back in a more consultative role. However, you shouldn’t let that fool you, because Dumont tells me that one of Disney Mobile’s biggest goals with this game was to stay true to the iconic 8-bit world of Tiny Tower and preserve its unique niche of gameplay, a modern mobile legacy which Dumont describes as being almost sacred to him and his team. Well just playing through the game for a few minutes, you can already tell that Disney Mobile has done NimbleBit proud with this release, as Star Wars: Tiny Death Star is certainly a Tiny Tower game here in every sense of the word.

Another thing that was important to Dumont and the rest of Disney Mobile in developing this game was to make sure that Star Wars: Tiny Death Star immediately felt both familiar and comfortable to seasoned Tiny Tower players. At the same time, they also wanted avid Star Wars fans that might be new to the world of Tiny Tower to feel right at home as well. Dumont describes the game as a “spiritual upgrade” to the original Tiny Tower, and he stresses that the game doesn’t take itself too seriously, and the quirky sense of humor is one of the biggest selling points to get your Tiny Death Star filled with all sorts of Star Wars-themed Bitizens.

You are building a miniature Death Star, after all, and Dumont even admits that from a certain point of view, there is something a little inherently evil about building a spa inside of this intimidating structure. And along those lines, Disney Mobile has dipped into all ends of the vast and beloved Star Wars universe in deciding what kinds of elements to include here in this game, which is only evidenced as Dumont rattles off a list of some of his favorite room types to me during our talk. In addition to your typical retail, residential, and restaurant rooms of traditional Tiny Tower fashion, you’ll also find unique and hysterical Star Wars-themed rooms like the Cantina, Bounty Hunters R’ Us, the Trash Compactor, Holochess Hall, The Dark Side Cave, and loads more.

One of the biggest new additions here in Star Wars: Tiny Death Star is an integrated collection component, where players will be able to collect various Star Wars elements like heroes, outfits, and more, just by earning in-game currency through regular gameplay. And then there are also the underground Imperial levels which players can use to craft special top-secret supplies, and of course, there’s got to be some deeper reasoning as to why Luke Skywalker and Princess Leia are hanging around in the Tiny Death Star, right? Disney Mobile also has early plans to support the game over at least the next year with additional content updates, although the team is keeping the specific details on that locked up tighter than the doors of the Death Star itself. 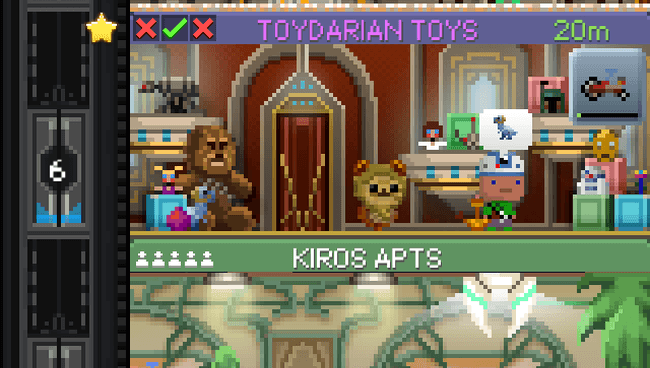 So in many ways, just like Dumont and his team had initially realized when first naming the game, Star Wars: Tiny Death Star is exactly what it sounds like: a Star Wars-themed version of Tiny Tower. But better yet, the game is also exactly as fun as it sounds. Disney Mobile has nothing but the highest admiration and respect for NimbleBit, and this shows through in the wonderful and quirky 8-bit love letter that they’ve managed to create here together. But don’t just take my word for it: you can download the free-to-play Star Wars: Tiny Death Star right now, and be sure to keep an eye out for our official review of the game coming up in the very near future. May the 8-bit Force be with you!