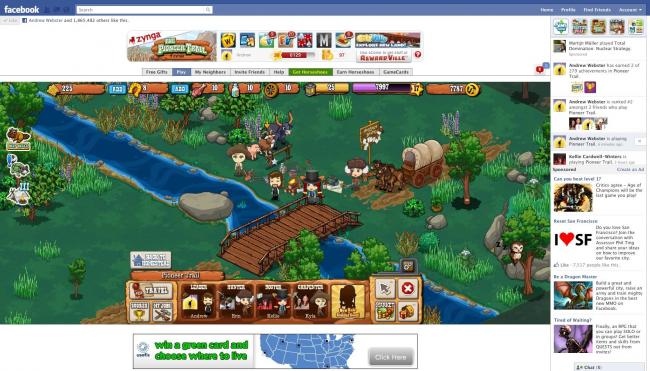 Announced nearly two weeks ago, Facebook’s minor redesign for games is slowly starting to roll out to users. The changes were made in an attempt to improve the experience players have while actually in a game, as well as improve discoverability by making it easier to find games that you want to play. From what we’ve seen so far the changes are solid improvements, or at least they will be once everything starts to work as advertised.

One of the big changes is that, while playing a game, Facebook now makes better use of your screen real estate so that games are no longer confined to a tiny little box. You can check out this feature in action while playing the new Pioneer Trail expansion for FrontierVille: as you expand and contract your browser window the game grows and shrinks alongside it. It’s pretty slick and makes for a better playing experience. 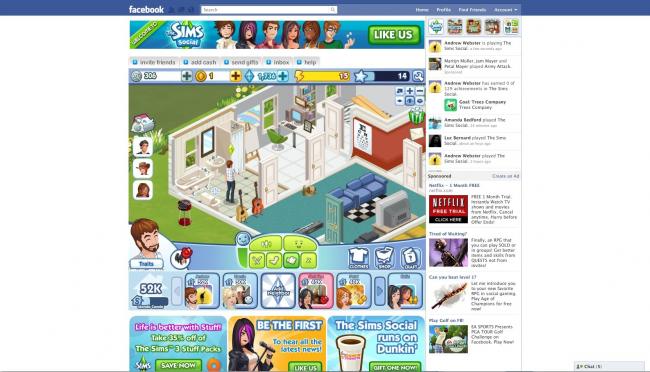 Unfortunately most games don’t seem to support the new feature yet. Most of the games we tested, including new releases like The Sims Social (pictured above) remained confined to the traditional square playing area. Whether these games will be updated to make use of the feature is unclear.

You’ll also notice a new information bar on the right side of the screen that presents some useful data, including links to your most recently played games. There’s also a real-time game news ticker that updates as your friends accomplish things in the games they are playing.

In addition to the games themselves, the Games page has also received a facelift. Instead of simply seeing a list of requests (though these still show up) and your most recent games, the Games page now has three different sections: “Most Recommended,” “Newest,” and “Friends Playing.” The “Most Recommended” section seemed to simply be a list of some of the more popular games on the platform. For me the top three games listed were CityVille, Empires & Allies, and Gardens of Time, all top 20 apps in terms of monthly active users. 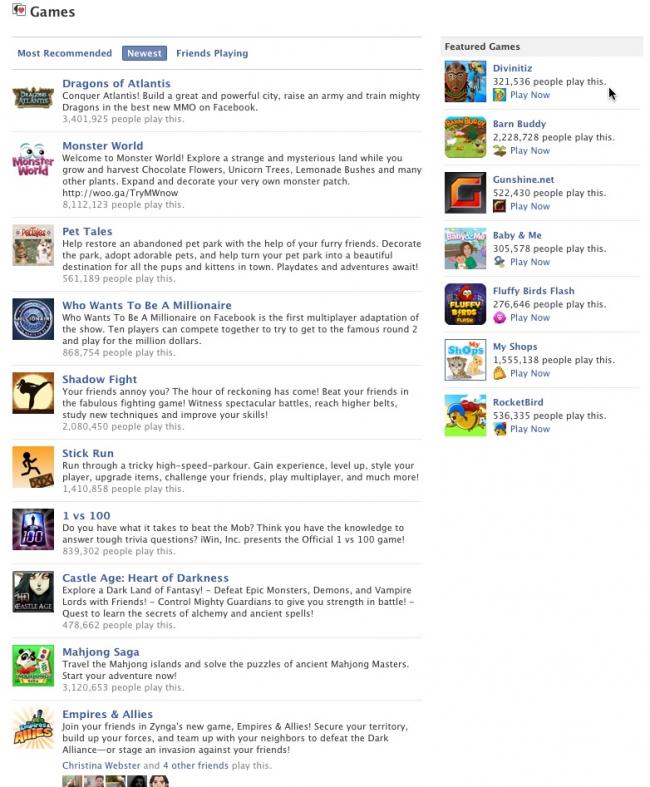 The other two sections weren’t quite as useful as they first appeared to be. The “Newest” section listed some relatively old games like Empires & Allies and Monster World, while the “Friends Playing” section had just three games: FarmVille, Lexulous, and Bejeweled Blitz. This was especially strange since everyone I know seems to be compulzively playing The Sims Social.

In theory these changes are all for the good, but until they work properly they’re not quite so useful. In particular the “Newest” section could be a great way to discover new games, something which can be relatively difficult right now. But that only works if it actually lists games that are, you know, new.

Samsung uses the “but it was in a movie!!” defense to fight Apple’s iPad patents

Gardens of Time heads to Atlantis for second premium chapter