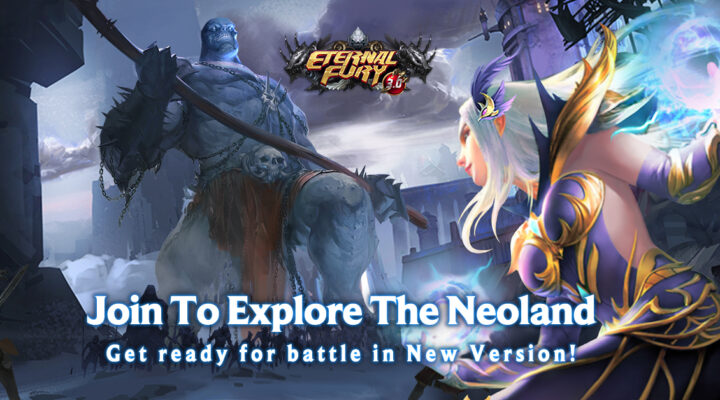 Eternal Fury, one of the most popular titles on the Game Hollywood Games platform, has just received some “genre-bending” changes courtesy of its latest update.

Version 3.5.2, which has been rolled out in both the EN and the EU versions, introduces a ton of new stuff, including airships, city lords, monster sieges, democracy, and a host of other gameplay features.

But that’s not all. The undisputed main event of the latest Eternal Fury patch is Neoland, a whole new map board to explore.

Before we get into all that, let’s have a recap on the story so far.

The internal unification is complete, but the hard times aren’t over for the Human Alliance. Monster hordes are still massing, and so a party of knights, berserkers, magicians, priests, archers, and rangers (all the coolest kinds of human, basically) set out to consult the oracle and learn what the hell is going on.

Except they can’t reach the oracle. The rainbow bridge to Asgard is broken, so the humans consult Jotunheim and the Titans – both enemies of the gods – instead.

And where do Jotunheim and the Titans live?

Your journey through Neoland will see you obtaining materials, building a glorious, robustly fortified city, and holding off waves of monsters during thrilling monster siege events.

Not only that, but you’ll get to fly in an airship when you travel from the mainland to Neoland.

Heads up: your first journey on one of these airborne vehicles involves a monster fight, followed by an abrupt return journey if you lose, so you’ll have to keep your wits about you.

And when you’re not fighting you can work your way up the greasy pole of politics in your City. First you need to become a Town Hall Officer, making donations and taking part in rudimentary democratic processes.

Once you’ve done your time in that role, you can be elected City Lord, which gives you access to additional power quests.

Eternal Fury has just received a whole chunk of extra gameplay, so this is a good time to give it a shot if you haven’t already.

Play Eternal Fury for free right now on Game Hollywood Games. You can also check out the game’s Facebook and Discord pages, and official website.

If you’re in Europe you can play the game here too, and the Facebook page is here, the title’s website here.

Cyber Monday: Buy a 2TB Lifetime Plan for $399 and Get a Free pCloud Crypto Folder