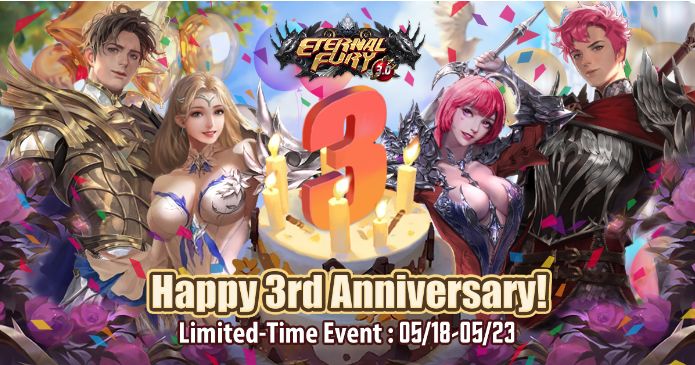 Eternal Fury is celebrating its third anniversary with a limited-time event.

From May 18th until May 23rd you’ll be able to spin the lucky wheel every day for the chance to win a whole array of prizes. They include scrolls, gold, legendary XP, mount evolutions, ultra-rare heroes, carnival wings, and more.

Then there’s the daily login event, where you can bag yourself a 3rd Anniversary avatar, fashion items, and wings just for showing up.

A special cross-server Anniversary Fight event, meanwhile, will let you take part in a match every day between 9am and 10am, and again between 7pm and 8pm. Here you’ll get a chance to win chests and participation rewards.

Lastly, Eternal Fury is giving away exclusive gift codes on its Facebook and Discord channels, so you can get in on the action even if you can’t load up the game for whatever reason. For the uninitiated, Eternal Fury is a popular and stunningly presented MMORPG with an epic story involving Titans, gods, giants, and other mythological badasses. You can play it for free on Game Hollywood’s online gaming portal.

And there’s more. Not only is Eternal Fury getting a host of anniversary events, but it’s getting a few awesome updates into the bargain.

For one, there’s now an Eternal Fury EU server, meaning players on the European continent won’t have to play according to the PDT time zone. This new server is already up and running, with English, German, and French languages all supported.

Another major update is the new Empire Siege guild mode. This allows players to fight in both PvE and PvP battles over the course of 30-day seasons. Each season is a fully fledged territorial war. But be warned: only the top three guilds in the seasonal ladder can qualify for Empire Siege.

A whole cast of new Heroes and Goddesses has been added to the game, too, including Frigga, Loki, and Heimdall from Norse mythology, and a powerful new Wind Goddess. It’s all happening in Eternal Fury this month. Head on over to Game Hollywood to start playing.