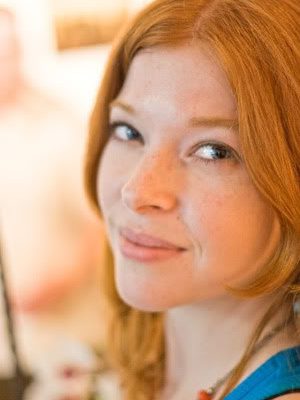 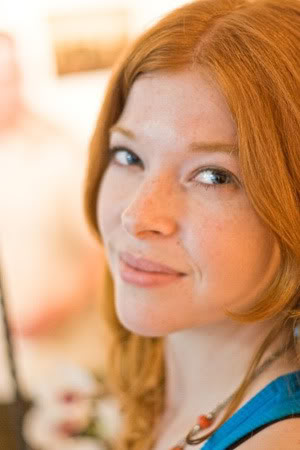 Erin Robinson was creating indie games like Spooks and Nanobots in her spare time and working in a lab by day until she crossed paths with Dave Gilbert of Wadjet Eye Games (The Shivah, Blackwell series, Emerald City Confidential).

Erin and Dave have teamed up on a new casual-friendly adventure game called Puzzle Bots, which was recently entered into the 2010 Independent Games Festival. Erin took time to chat with Gamezebo about the upcoming project and what life is like as a full-time indie developer.

Hi Erin, thanks for taking the time to speak with us. Please start by telling us a little bit more about yourself.

Hello Gamezebo! Thanks for taking the time to interview me. I guess I’ll start with the obvious things: I’m 22, I live in Montreal, and I can sort of speak French. As of last year I’m a full-time independent game developer. In my day-to-day life, this means that I sleep late, work late, and have the best job when I go to parties.

How did you break into the games industry?

To continue your analogy, I sort fell in while peeking through the skylight. I had been making games as a hobby since I was 18, but I never thought of it as something serious. I hung out in an online community for adventure game developers, and they were so supportive and fun that it made me want to keep creating.

I’ve mentioned this before, but I didn’t really tell anyone else – my friends or family – that I was making games. I was working on a psychology degree at the time, and thought I’d do something respectable, like science. After graduation I got a job in a lab, and realized pretty quickly that it wasn’t for me.

As fate would have it, I had just been offered a publishing deal from Dave Gilbert of Wadjet Eye Games, so I quit my job and started working on our indie adventure Puzzle Bots.

Tell us about your previous games, Spooks and Nanobots.

Spooks is a game about a little dead girl who wins a live goldfish at a carnival game. Seeing as she’s in the land of the dead, she needs to first find out what "alive" means and then how to rescue her fish. The game was fun to create, the whole way through, and took about eight months to finish. I’ve been very happy with the reviews I’ve gotten since then. One reviewer even suggested that I chose a dead protagonist because I was a brain-dead university student at the time, which I thought was hilarious. 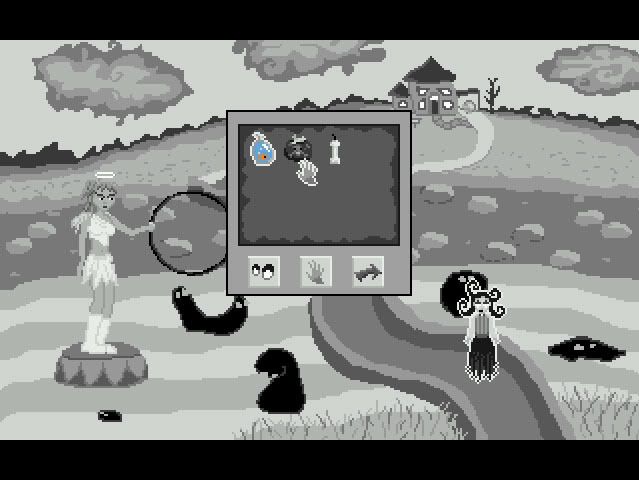 Nanobots is a game about robots that can love… sort of. It takes place in a robotics lab, where a hippie scientist named "Groovy Greg" has created six robots that are supposed to work together. The only problem is, the robots hate each other. It gets to be an even bigger problem when an evil professor threatens to crush them, and they’re forced to set aside their differences.

The game lets you control all six of the robots, each of whom can do something special (e.g. push heavy things, heat things up, etc.). I think it was an interesting way to have an adventure game with a multitude of verb options, but I’ll talk more about that later.

How did you become involved with Wadjet Eye Games?

What can you tell us about the inspiration behind your upcoming game, Puzzle Bots, which is being published by Wadjet Eye?

Puzzle Bots is a fun little romp about robots who like to escape when their "humans" aren’t looking. It takes place in a robot factory, and since you only control the robots, you see everyday objects on a massive scale. A little added interest comes from the fact that whenever the robots change something, it affects the humans indirectly. For instance, early in the game, the bots accidentally get the main character in trouble with his boss (they raid the snack machine, among other things). I might get in trouble if I say I based the story on real life experience, but it also touches on things like relationship issues and workplace politics. Don’t tell my old lab partner. 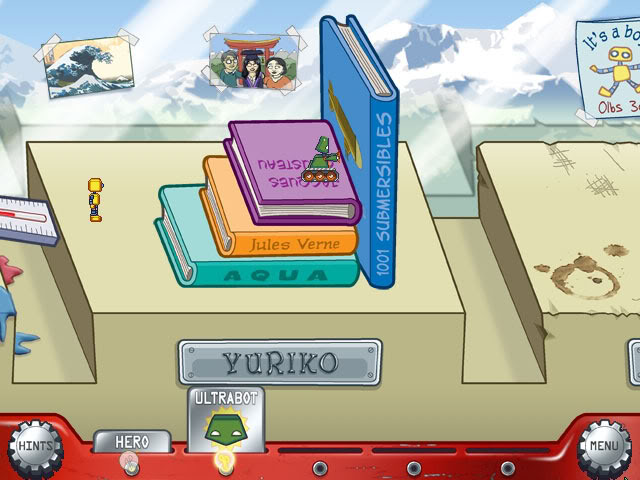 Both the story and the game mechanic were based on my game Nanobots. Instead of having one character with a number of verb options, I decided to make a bunch of characters that each had one verb option. So, each robot had a "special ability." I think it helped get around the annoying adventure game trope of trying random actions on random things. You have to really slow down and approach things logically.

Someone wrote to me this week and said, "Nanobots was the only adventure game I’ve ever played, from King’s Quest to those Fully Ramblomatic games, that was difficult without pissing me off." If I can get that kind of response from an adventure game fan, I think I’ve done my job.

Can you elaborate on some of the other ways you took aspects of Nanobots and adapted them for a more casual audience (aside from the one verb per character change)? I think that’s really interesting.

Sure, making the game casual-friendly has been a big consideration in the design of Puzzle Bots.

Nanobots let you control six different robots from the very start of the game, which a lot of players (even the "hardcore" ones) found overwhelming. When Dave approached me about doing a casual spinoff of the game, his first suggestion was that we introduce the player to the different robots gradually. That’s what led to the level-based structure of the game. You start with one robot, a keen little dude named "Hero," and are gradually introduced to the others over the course of the game. 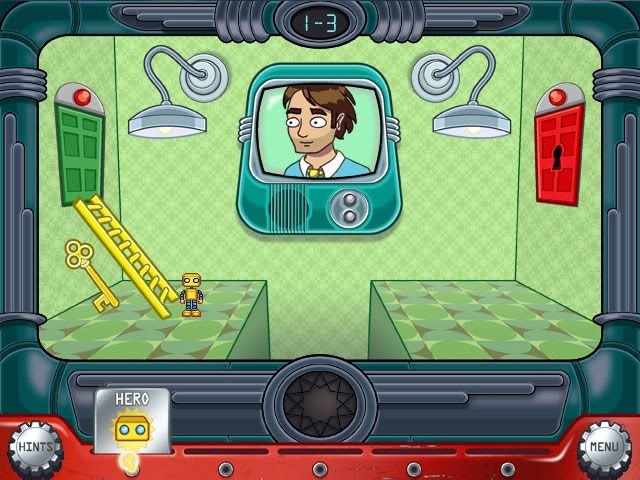 The level-based structure is a lot friendlier than traditional adventure games. If you get stuck, there are a finite number of actions you can take, and that alone should help you narrow down the steps to solve a puzzle.

Another big difference is the way the game handles inventory. Rather than having the player cart around a bunch of obscure objects for the majority of the game, everything you pick up is confined to one level. In general, I’d say the game places less importance on inventory puzzles than other adventure games. There are robots that can swim, bomb, and flamethrow, which provides some cool options for puzzle design.

A lot has been said about how casual games "reward" the player. I think it’s very easy to go too far — too many sparkly gems flying at you for achieving some minor goal. I’ve tried to make the game’s rewards very natural. In every level, the robots can find a bonus item, which gets transported to their habitat as a decoration.

There’s some hidden concept art, and hunting for "hints" is something of a mini-game itself. Also, every time you beat a level, there’s a cutscene where you see the effect your actions had on the humans. Sometimes you help them out, and  sometimes you accidentally create a love triangle. I hope that’s enough to keep the player engaged.

What are some of the biggest challenges you’ve faced as an indie developer?

I’ve had to learn a lot of skills unrelated to game design. I’ve got to keep track of game assets from the six members of my team, I’ve got to manage budgeting and bank transfers, I’ve got to constantly update design documents when we decide to make changes… basically, it keeps me busy. I’m also doing all of the concept art and puzzles myself, plus a lot of the animations, all of which is very time-consuming. But as long as progress is steady, with new music and backgrounds coming in, it’s pretty easy to stay motivated. 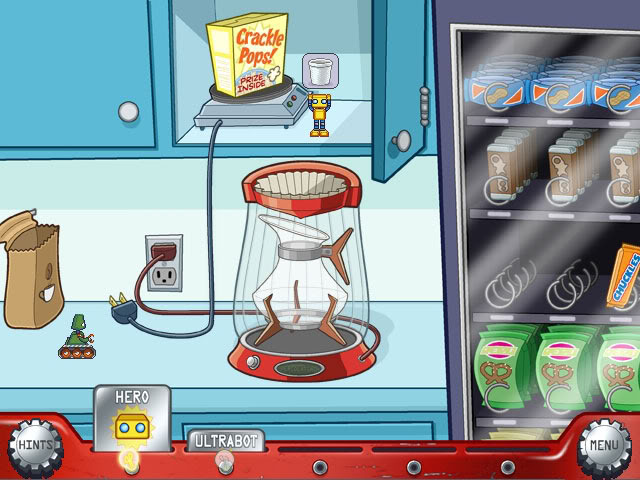 What games are you playing right now? What games have impressed you lately?

Earlier today I finished an amazing little tower defense game called Defense Grid. I was hooked from the very start. It made me want to make one too! Over the past few months I’ve also enjoyed, in no particular order, Fallout 3, Blueberry Garden, Braid, Cogs, Half Life 2, and Bioshock. I’m also looking forward to playing Osmos when I get a chance. About half of those are indie titles, so I think I’m doing an okay job supporting my comrades.

The "next big thing" this year seems to be social (e.g. Facebook) games. What do you think about this phenomenon? Any interest in developing games for social networks?

I don’t play any Facebook games; I’m wary of sharing my personal info, but that’s just me. Here in Montreal there’s a really interesting social game called Akoha that a friend of mine is working on. The idea is that you buy a deck of cards that have good deeds written on them, such as "Compliment a stranger" or "Buy someone chocolate." You create an online profile, and if someone confirms that you’ve done one of these good deeds (and given them the card), you get karma points. It’s a way to do good in a social networky kind of way.

Thank you for playing!

REO Speedwagon: Find Your Own Way Home – Just In