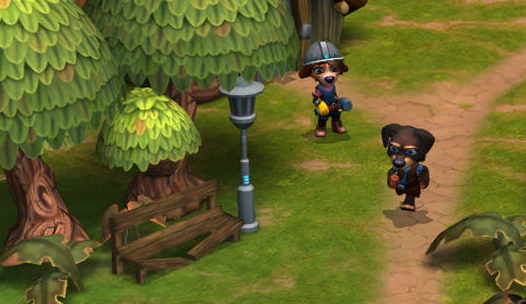 To be more precise, it’s not his own money, but the $6.5 million raised for his latest venture, If You Can Company. The startup’s first title, If…, is an episodic RPG intended for kids ages nine to 11 that just hit the iOS App Store a few days ago.

Hawkins has been somewhat under the radar since leaving another studio he created, Digital Chocolate, in 2012. His current project has apparently been in the works since then, and he obviously has high hopes for it, telling VentureBeat’s Dean Takahashi that it will mean more to him than creating Madden NFL Football to see If… catch on.

The game doesn’t seem to be lacking in ambition, as If You Can co-founder Ben Geliher has named Pokemon, Animal Crossing and The Legend of Zelda as influences for its look and feel. Built on Unity, If… allows young gamers to design their own anthropomorphic animal characters and set them on the path to rebuild and restore peace to a town called Greenberry, with a heavy focus on making moral decisions and getting conflicting factions of dogs and cats to co-exist peacefully.

If there’s any doubt that more kid-friendly fare has been on Hawkins’ mind, he put it to rest earlier this month when he drew parallels between the gaming industry and pornography at this year’s DICE summit. But the market for educational games can be a tricky one to navigate, and his experience with 3DO proves that not everything Hawkins touches turns to gold.

Even getting the word out about If… could be a challenge, as it currently has just two reviews in the US App Store. The game’s first chapter is free, with subsequent installments available for a $5 subscription – and perhaps more importantly, no microtransactions. Hawkins has stated that If You Can has enough funding to “launch and continue our game as a service,” so expect to see him committed to it for the forseeable future.

GBA4iOS was made by… a high school student?!