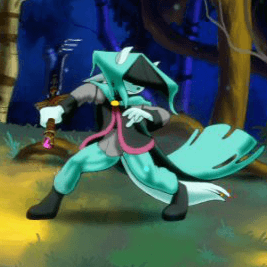 Good news for everyone who doesn’t own an Xbox 360 today: developers Dean “Noogy” Dodrill and Alex Kain have announced at their PAX East panel over the weekend that the XBLA-exclusive and indie essential title Dust: An Elysian Tail will be headed to Steam as early as April.

For those of you who never had the chance to play it before (sadly, myself included), Dust: An Elysian Tail is a 2D sidescrolling platformer with action and role-playing elements akin to the old Metroid and Golden Axe adventure games. The 2012 indie gem has been applauded by critics and gamers alike for everything from its bold visuals and gorgeous environments, to its immersive RPG aspects and slick combat mechanics.

In speaking with Kotaku, Dodrill also vaguely teased a possible Dust 2 at some point in the future, as well as a brand new IP which the duo plans to start working on next following the Steam port of Dust. Dodrill admits, “I probably won’t have much to share for the first year of development, however it’s my plan not to spend 3 and a half years on another game.” That sounds fair enough to me. Let’s just hope we see a multi-platform release for the team’s next title as well!

Little else is known right now about the Steam port, other than that it will be optimized for a keyboard-friendly control scheme, and that “the game looks amazing at 1080p.” Be sure to keep checking back on Gamezebo to find out when a more official release date for Dust: An Elysian Tail on Steam is confirmed in the upcoming weeks.

5 Things We Learned from PAX East