Duels of the Planeswalker 2013 gets release date, still lacks customization? 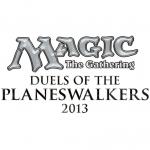 When we previewed Magic the Gathering – Duels of the Planeswalker 2013 (cue deep intake of breath), we gushed about the series’ long awaited arrival on iPad, and encouraged new players to give the series – and card game – a chance whenever the game’s then-mysterious release date arrived. Well wait for your wait no more! Duels of the Planeswalker 2013 hits virtual shelves June 20th, so you can begin your wait without delay. Don’t say we never get you anything nice!

Beyond just a release date, however, a trailer that launched in between our last preview and this week’s E3 Expo gives a much firmer picture of the way Duels of the Planeswalker 2013 is going to work. It seems that – as with the 2012 edition – players are going to have access to a set of pre-made decks, with Wizards touting 10 completely new (and heavily themed) constructions this time around, all of which draw from cards in the yet-to-be-released “core set” for 2013. In addition, players will be able to get a taste of Planechase: a game format centered around “plane” cards that transport play to an exotic world in which special rules are stacked on top of normal play.

With that said, the hopes of a vocal online community for a more advanced palette within which to construct decks and acquire cards seem to be dashed by this trailer. Once again, for better or worse, Duels of the Planeswalker 2012 will be a walled garden universe within which new and casual players will likely feel more at home than those who devour Magic: The Gathering in physical form and want something more substantive.

On one hand, I can see completely why Wizards would not want to betray a business model which already includes a premium competitive online community in the form of Magic: The Gathering Online. Players looking for their fix of more dynamic play and deck construction will likely be pointed the way of M:TGO where they can dole out real cash for packs and play. Nonetheless, as a huge fan and casual player of the game myself, I couldn’t see the harm in at least allowing for the 10 stock decks in Duels to be disassemblable and playable within a freeform online matchmaking system based around personal rank.

What do all the Magic players out there think? Is there untapped room in the console series for Wizards to carve out the kind of space more competitive players are talking about? Feel free to chime in the comments. You can get your hands on Magic the Gathering – Duels of the Planeswalker 2013 on June 20 on XBLA, Steam, and PSN for an as-of-yet undisclosed price (though smart money is on $10.00!).