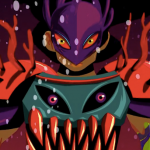 The previous game from Drinkbox Studios, Guacamelee! was a wonderful send up of the Metroidvania genre that’s colorful in more ways than one. Its bright Day of the Dead/luchador aesthetic was a cheerful celebration of Mexican culture, while its story and characters were frenetic and entertaining without becoming cloying or clichéd.

Severed looks similarly Central American, but a whole lot more serious. Guacamelee! had its sullen side, but Severed sounds like a tale of revenge. Our warrior protagonist has lost her arm (and possibly more, if I’m interpreting the above trailer correctly) and seeks retribution against supernatural forces.

So far it’s only been announced for mobile platforms, but the devs haven’t ruled out the possibility of bringing Severed to touchsreen devices like Vita, 3DS and even the Wii U. Considering the company’s history with Sony, at least one of those is probably a safe bet.

According to the reveal on Destructoid, Severed’s inspiration is drawn from Mega Man, Mike Tyson’s Punch-Out and Infinity Blade.

The former is a reference to the game’s protagonist, who loses her arm and gains new abilities by defeating bosses and grafting the limbs to her own body. The latter two examples likely refer to the combat which, going by the trailer, appears timing-focused and gesture-based. The whole thing is wrapped up in Drinkbox’s colorful, boxy (no pun intended – seriously, it’s like half a pun at best) art style.

Severed is set for release some time in 2015. If you’ll excuse me, I’m going to find whoever performed the song in that trailer and immediately buy all of their music.

UFHO2 dev: Valve doesn’t want my game, so torrent it

Butterscotch Shenanigans and the Art of Speedcrafting