Draw Something show announced for UK 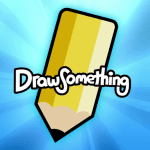 Back in September we learned that CBS was doing a casting call for an upcoming game show based on the popular Draw Something app. It’s unclear as to whether or not that show is still happening, but it looks like Channel 4 and Victory Television have teamed up with Zynga to adapt a different Draw Something show for the UK. So, that’s something.

That in itself isn’t so shocking. What’s really weird about this announcement is that the show is going to be called “Draw It!” You’d think Zynga and their collaborators would want to take advantage of the well-known Draw Something name – especially when that’s the only distinguishing factor between it and past game shows like Win, Lose or Draw.

In any case, the show will have a structure that’s very similar to the one proposed for the original, CBS-produced show. Two teams, each consisting of one celebrity and one contestant, will compete in a series of drawing challenges. The contestant who performs the best will team up with the two celebrities and take on a final drawing challenge where the celebrities must correctly guess five different drawings. If they pull it off, the contestant wins the money. If they fail, the money is added to the jackpot for the next show.

In all, it seems like Zynga and co. are playing it safe with Draw It! It sounds remarkably similar to past game shows that revolve around guessing drawings, although it might get interesting if they make a concerted effort to only bring on people who are horrible at drawing.

Replay Wednesdays: The Sushi Spinnery, Another World and more!