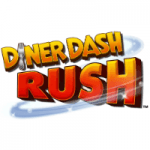 While some game announcements are filled with screenshots, details, and more promises than a discount engagement ring warehouse, other developers like to keep things mysterious. With that in mind, PlayFirst has just announced the next game in the Diner Dash series by merely teasing a logo.

So what’s Diner Dash Rush? We’re as puzzled as you are. We reached out to PlayFirst for additional info, and it netted us a little bit. Here’s what President and CEO Marco DeMiroz had to say;

“We’re thrilled to announce Diner Dash Rush, the latest and greatest installment in the fan-favorite DASH franchise, with a sneak-peek at the logo for the very first time. Stay tuned for more exciting details to be revealed about the newest antics of Dinertown as we count down to launch on June 27.”

Do we have any idea what the game is? No. Do we know when it’s coming? Yes! One week until the big reveal, folks.

And while no platforms have been confirmed, PlayFirst’s established mobile-first attitude combined with the 27th falling on a Thursday – the big day for iOS releases – suggests that this one will be iPhone and/or iPad bound. Stay tuned!