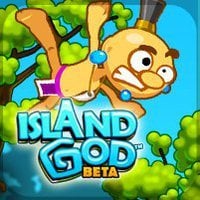 Another day, another game released by our friends at Digital Chocolate.

On Monday it was Hollywood City. Yesterday it was Vegas City. And today, it’s Island God.

Island God lets users rule over their own little island paradise and control a tribe of little worshippers. If this reminds you of Pocket God or Godfinger on the iPhone, this premise may sound familiar to you. It’s new for the Facebook gamers, though.

In the words of the game’s fan page:

“Rule your own little patch of paradise as the ancient Island God and pick your side: Good or Evil! Lead your Tribe of worshippers into prosperity by constructing new buildings, expanding your island and more. Don’t feel like being good today; punish your tribesmen at your whim and ultimately decide what kind of a god you are.”

Yesterday, I speculated that Digital Chocolate’s strategy was to create a slew of games around the “City” theme (Millionaire City, Hollywood City, Vegas City). Then, they launch Island God today, thereby killing my little theory within 24 hours of my proclamation.

Since it’s Wednesday, and Digital Chocolate has released a game a day so far this week, I can come up with a new theory: that Digital Chocolate will release a new game every day this week. Meaning, expect new game announcement on Thursday and Friday as well.

Then again, maybe I should get out of the prediction business. I am already 0 – 1 when it comes to Digital Chocolate so far this week, and it’s not like I am a . . . god myself.

I will say this. Every game that Digital Chocolate has released so far this week is well conceived (e.g., based on themes and concepts that work on Facebook or other platforms) and appear to have been developed over a long period of time.

If Digital Chocolate can score big hits out of the 3 – 5 games they release this week, they may end up as the #2 social game developer in no time. If Zynga does not stop meandering with small steps (e.g., releasing Hold’em on Android) instead of actually releasing new games, heck, maybe Digital Chocolate can end up in the #1 position in the long run.