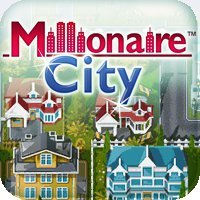 “We are very happy to announce that we’ve just launched this new game where you too can become rich and own skyscrapers, mansions and whole cities. You will have a blast!”

Millionaire City looks to be another city building game for Facebook which is now officially the next big thing on Facebook aside from food and farms (or food and farms, in the case of Wonder Island released yesterday).

We’ll cover this game with our usual editorial fanfare. Be first to play the game and be sure to set an alert on our Millionaire City games page.

Will Amazon’s next Kindle feature games?