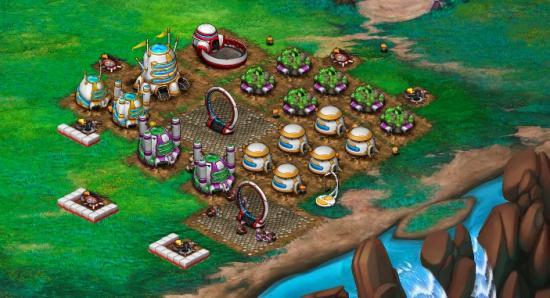 The boom in mobile, social and browser gaming has been an incredibly healthy thing for the industry, but it’s also cultivated an environment where a whole lot of great games go unnoticed. That’s where platforms like Spil come in. With over 50 different gaming sites under its belt, it’s helping developers all over the world find an audience.

The best recent example of Spil’s reach comes in the form of Galaxy Life. Developed by Digital Chocolate, the game was performing relatively well on Facebook but failing to do as well as the studio knew it could. With juggernauts like Zynga and EA to contend with, it can be an incredibly tough egg to crack. In response, Digital Chocolate formed a partnership with Spil.

“We were impressed from the outset with Spil Games’ focus on their users as gamers, first and foremost,” Digital Chocolate COO Jason Loia told me in an interview. As a network dedicated strictly to gaming, Spil has the immediate advantage of knowing its audience. Unlike Facebook, where convenience is the primary factor that drives users to games, The Spil community flocks to its network of sites because it loves video games. Even more, the individual sites are dedicated to a host of different gaming demographics.

“We have three channels. One channel focusing exclusively on girls… then we have a games channel focusing on boys and girls between 8-15, and we have a family channel focusing on an adult audience – primarily women,” Spil CMO Oscar Diele informed me. Despite these differences, there’s one aspect in particular that all of these sites share: They’re dedicated to social gaming. “Our users like to play games, but even more they like to play games together,” Diele said. With that in mind, it’s easy what makes a network such as theirs so enticing to social games developers.

And as a massive plus, Spil is proving to be very fruitful for the studios it partners with.

“[Galaxy Life] is growing fast. Currently we have approximately 200,000 daily active users and 1 million gameplays, and we still see tremendous growth,” Diele mentioned. The network currently accounts for around 40% of the game’s traffic, an amount which – needless to say – is something both companies are happy about.

There are a few important factors at play here. For starters, Spil takes measures to ensure that their platform doesn’t become oversaturated with games. “Not any developer can come to us and publish their game on our platform. We really filter the content that is approved,” said Diele. It may sound harsh in some respects, but maintaining a gated network creates a better experience for both the userbase and developers involved. It’s also a matter of resources, as Spil sinks a lot of work into making the games on their platform successful.

“If we publish social games, then we take care of all the promotion and we put dedicated teams on them,” Diele told me. This includes things like localizing the game for other regions, collecting the payments, doing customer support, and handling community management. That’s quite the load to take off a studio’s back, so it’s understandable why Spil is hesitant to make their platform an open one.

Digital Chocolate, the current poster boy for Spil’s potential, is confident they’ll remain partnered with the platform well into the future.

“Our strategy is simple: grow our audience through network partnerships that are a fit with our games, and Spil Games is certainly shaping up to be a very strong fit.” It wasn’t long ago that the company was suffering through massive layoffs and the loss of its founder Trip Hawkins. But they’ve worked hard on refining their focus since then, and it seems as though they’re finally managing to get back on track. When I brought it up, Loia was quick to agree.

“Yes, organization changes were made to essentially focus all of Digital Chocolate’s efforts towards our primary mission: making the highest quality, virtual goods-based social games for web and mobile,” he responded. “We are very excited about the prospects for our upcoming titles and the company’s future.” And why shouldn’t they be excited? They’ve solved one of the biggest hurdles smaller developers currently face in the mobile and social space: Finding a receptive audience.

It would be shortsighted to attribute all of their recent success to Spil, but the beneficial relationship between the two companies shows that there’s a whole world of opportunities for social developers outside of Facebook.

The Price of Piracy