Home / News / Did a hacker just reveal how much Clash of Clans makes in a day?

Did a hacker just reveal how much Clash of Clans makes in a day?

But what does this “bigness” really translate to in terms of day-to-day dollars? According to one hacker, the answer is around $5 million a day.

Last night, the official Clash of Clans Facebook page was hacked by someone using the name ‘Ethical Spectrum.’ After posting a quick message to confirm the hack, an image was posted that allegedly depicts Supercell’s in-house analytics dashboard, which revealed a revenue of $5.15m for February 7, 2014.

Before we jump to conclusions, there are a lot of reasons to cast doubt on the accuracy of this. For one, we don’t know who the hacker is or where they got their information. For all we know they could have just whipped this together in Photoshop to pull a prank. And even if it is real, we don’t have the context to understand what that number really means. Is that company-wide revenue, or just for Clash of Clans?

And if this is real, how much is Supercell spending a day in customer acquisition to get this number? If they spend $4m a day in advertising costs (and I saw a TV spot for Clash of Clans recently, so it’s certainly in the realm of possibility), and they have regular operating costs to contend with, $5m a day could mean they’re barely breaking even. There’s just no way to know. 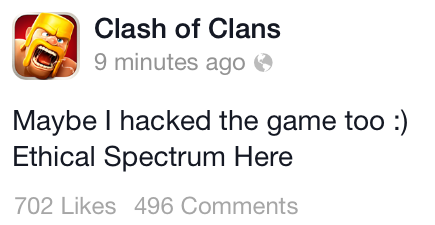 Does ‘Clash of Clans makes $5m a day‘ sound like a fantastic headline? Absolutely. But without context, it’s important to remember how little that number really means, and how credible the source delivering that figure might be.

Thanks to GZ reader Benny Hsu for catching this one before Supercell took it down. The images in this article are courtesy of Benny Hsu (and if that name sounds familiar, but you can’t quite place it, you might want to read this one more time.)

Build and defend your space station in SBX: Invasion Base Defense