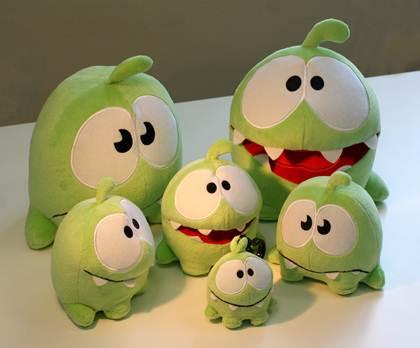 In an interview with ZeptoLab’s Semyon Voinov earlier this month, we asked if there were any plans to let consumers get their grubby little mitts on some Cut the Rope merchandise. We were told “we have tons of merchandising items in the works,” and it looks like they’re starting to surface sooner rather than later. To coincide with the announcement of their upcoming “Toy Box” update, the Cut the Rope team have unveiled the very first real world Om Nom toys.

Making their debut at the San Diego Comic Con this week, there’s no word on when this adorable little collection of Om Nom’s will be made available, nor at what price. Still – who wouldn’t want to put one of these little guys on their desk?

The unveiling comes right alongside the announcement of Cut the Rope v1.4 – aka “The Toy Box Update.” According to publisher Chillingo, players can expect the following from the next free update;

There’s no word on an exact release date for 1.4, but Chillingo are promising that it should be hitting Apple’s App Store “soon.” Hopefully some more details on the toys will surface just as quickly.