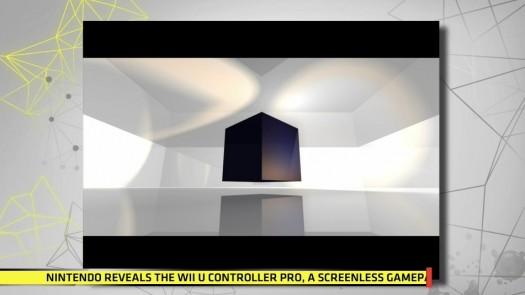 Since his friendly defection from Microsoft Studios, video game industry legend Peter Molyneux has kept onlookers wondering what would come of his independent venture 22 Cans. For many, if only because the developer’s grandiose vision and promises have become the stuff of legend (and parody). Thankfully, Molyneux is never one to disappoint during a big event, and yesterday announced Curiosity: 22 Cans’ first app. Or experiment. Appsperiment?

Far from your typical title, Curiosity won’t offer players much in the way of… well, play at all. Instead, booting up the app will bring players face to face with a floating black cube suspended in white space, formed of thousands of smaller cubes. If you approach the cube, you’ll soon find you have the ability to tap to break apart its surface, bringing you closer to a mysterious center.

In order to get to the middle of the proverbial Tootsie Pop, however, you’ll need to play in tandem with other curious minds, all of whom are sharing the same cube and chipping away at it along with you. Whether this means you’re limited to a certain amount of taps per play session, IP, or username, Molyneux wouldn’t say. Nor for that matter would he hint at what would be discovered once players reach the fabled innards of the cube. Has you sort of… curious, no?

All pun of phrase aside, the concept reminds me a lot of indie game Glitchhiker, which gave players a collective life total, and offered them a chance to fight an encroaching virus to earn lives and keep the game alive. Eventually, the difficulty of the AI won out, causing Glitchhiker to “go extinct,” representing a unique (if unfortunate) take on the experiences we share gaming together. And, simplistic as it may see at first glance, Curiosity evokes in me a genuine interest that many of the sanitized AAA offerings have failed to tug at so far.

Nonetheless, it’s hard denying how much Molyneux is starting to sound like his parodic, twitter-based counterpart!

Curiosity will be launching for mobile and PC at an unspecified date, with 22 Cans’ first major release planned to hit “within three years,” according to Molyneux.