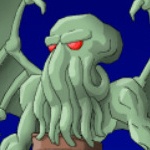 While I may have played a part in helping Gamezebo countdown the best games of 2011, there’s one game from last year that didn’t make any of our lists, yet still remained near and dear to my heart: Cthulhu Saves the World. Originally appearing on Xbox Live’s Indie Channel and then later on PC, the game was a throwback to the old days of 16-bit role-playing games, but with a twist. It starred H.P. Lovecraft’s bringer of end times in a surprisingly heroic role.

Full of laugh-out-loud moments, great old-school RPG gameplay, and plenty of set pieces and characters straight out of Lovecraftian mythos, Cthulhu Saves the World ended up scratching a very specific itch that I never realized I had. And now it’s about to scratch it again, as Zeboyd Games has announced that the game will be ported to iPhone, iPad, Android and Mac in “early 2012.”

“It still boggles my mind that a random thought of mine while I was waiting for an appointment one day – hey, wouldn’t it be funny if Cthulhu was a hero in a Japanese-style RPG – is now an actual game that people are playing and enjoying,” says a recent post on the Zeboyd Games blog. “With … the game coming to new platforms later this year, I hope even more people will be able to experience the weird adventures of Cthulhu, his own personal fangirl Umi, and the rest.”

IGT buys Double Down Interactive for $500 million in real money