Crytek to blast onto the mobile scene with The Collectables 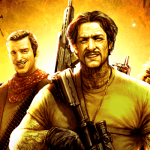 DeNA has announced a new partnership today with Crytek, the revered game developer who brought us such gritty console experiences as Far Cry and Crysis, for a brand new third-person mobile shooter called The Collectables. The upcoming action title is filled to the brim with massive gunfights and fearless heroes, and although it’s Crytek’s first foray into the world of free-to-play mobile games, they’ve certainly decided to bring their cutting-edge 3D visuals along for the ride.

In the game, players will assemble their very own team of action heroes and soldiers, as they upgrade their weapons and land tons of revolving rewards by taking out legions of diverse enemies in heated combat segments. And judging by that first released trailer of The Collectables doing its thing, it would certainly seem that action is the name of the game for this one!

The Collectables will be headed to iOS and Android platforms as a free-to-play game sometime in 2014, and interested players are encouraged to sign up and pre-register for notifications on the game’s official website, which will net them an exclusive character with limited-edition gear. And when you’re done doing that, why not mosey on over to the comments and let us know what you think about Crytek’s explosive new entrance into the world of mobile games!