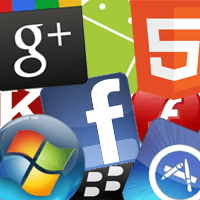 Yes, I just made that term up. Actually, the biggest buzzwords from walking the halls of the Game Developer Conference (GDC) are freemium and free-to-play (“f2p”) which apparently are two technically different terms but to me mean the exact same thing. Every company plans to release games that are free to play to start, but encourage purchases to keep playing. Some vocal players may gripe, but they are in the minority since games are making a lot more money with freemium than any other model out there.

The other big trend I spotted, however, is a bit more under the radar but will be huge in 2012, and that is creative convergence. Creative convergence companies offer technologies enabling developers to write games once to be played across multiple platforms and devices.

It’s creative because its targeted to creative types (developers) who do not have the time, money, or skills to deal with the technical issues of porting their games to multiple platforms. And its convergence because it’s all about getting a game across as many converging devices and platforms as possible.

Whereas in the past game players were loyal to one device (I am talking about you, Nintendo fanboys) today gamers want their games to be as mobile and frictionless as they are.

The problem for game developers is that while it’s relatively easy to design a game for one platform (the iPhone for instance), it’s more challenging to to design for many. Add in the fact that platforms such as Android require the game to on multiple handsets, and you have a situation where only game companies with big hits can make the cross-platform jump.

Enter the creative convergence. I had the opportunity to talk to three such companies at GDC, all approaching this problem in a different way:

– Ludei: This company is currently releasing its technology, CocoonJS, in beta, to enable developers to write games in JavaScript and HTML5 and create native game apps that work on both iOS and Android platforms. Ludei offers in-game ads and micro-transactions, and both are free (with revenue share) and paid versions.

– CocoaChina: CocoaChina is a China game developer and publisher that has developed Cocos2d-x, an open-sourced multi-platform application and game development framework that enables developers to create game in C++ and port across multiple iOS, Android and Win 8 devices. According to Lei Zhang (General Manager, USA), the company started as the project to support its publishing business and develop relationships with fellow Chinese game developers. What’s interesting is that though this project is based in China (a hotbed for game development and play), it’s global. And because it’s open-sourced, anyone can license and contribute to the technology, making it expansive as its community of developers want it to be.

Just as interesting, MoMinis also offer cross-promotion through their distribution network of apps, and they have one of the most popular Android games today, Ninja Chicken. As of last week, their apps have been downloaded over 7 million times. Next for the company is an expansion to iOS and Win 7, as well as more multi-platform features such as micro-transactions.

A lot of big companies with huge financial pockets are offering game developers a menu list of technologies to enable them to offer their games on multiple devices and platforms. And for this reason, I anoint creative convergence, and not freemium, as the most buzzworthy trend of GDC and 2012 so far.