Contra Evolution Revolution pops up (up, down, down, L, R, L, R, B, A, start) on Chinese App Store 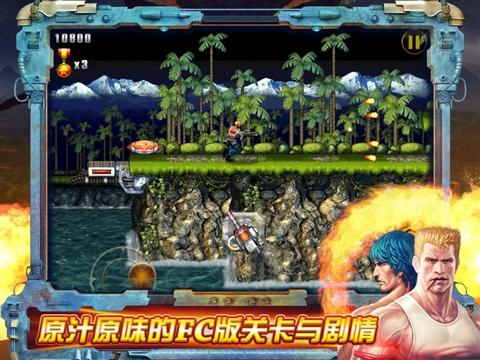 When a game called Contra Evolution Revolution shows up on the Chinese App Store, it’s hard not to be a little suspicious. The iOS platform has been home to an absurd amount of shoddy clones and poorly ported ROMs, with the hilariously fake Pokemon Yellow being one of the most infamous examples. But this particular release appears to be a legitimate remake of the classic NES/arcade game, featuring improved visuals and new playable characters. Who’da thunk?

Details about the game are incredibly scarce, and in fact Konami has yet to acknowledge its existence. All we really know is that it’s a thing, and that it may or may not release outside of China. It seems likely that it will, but the App Store is a strange, unpredictable place.

What’s most interesting about Contra Evolution Revolution thus far, barring its mere existence, is its control scheme. The game features virtual buttons and an on-screen joystick, and it’s hard to imagine a game as notoriously difficult as the original Contra being beatable without physical controls. But it’s possible the difficulty has been tweaked a bit, and it could be that the developers have managed to create the best virtual control scheme of all time.

And since we’re talking game specifics, Touchgameplay have released a couple videos showing quite a bit of gameplay, as well as some of Contra Evolution Revolution‘s features. In-app purchases will be a part of the game, for example, and there will be both an arcade and mission mode.

We’ll be on the lookout for any sort of announcements from Konami regarding whether or not the game will release outside of China. We wouldn’t bet against it, but we also wouldn’t have predicted an official Contra game randomly popping up on the App Store. Video games are weird, you guys.